On the night of Feb. 27, a geomagnetic storm caused Northern Lights to be visible in Europe at unusually low latitudes. And lots of photos of the lights soon began to appear online.

So thanks to Marco for giving us a heads up about this fake image that's begun circulating, purporting to show the aurora from space (with some tweets claiming it's a photo taken from the International Space Station). 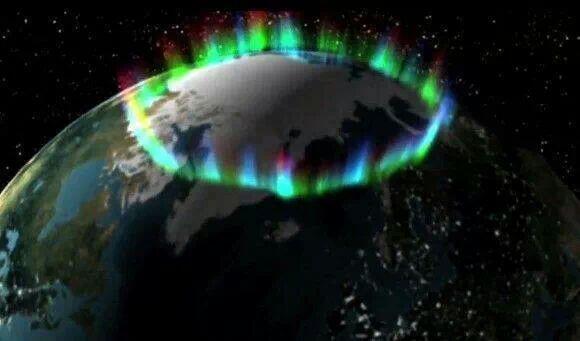 The quick summary is that this isn't a photo at all. It's an artist's conception of what an aurora would look like from space.

But as Marco points out, this isn't how an aurora would actually look like from space, since there's no atmosphere visible in the image (no clouds). And the aurora is incorrectly positioned over the true Pole rather than the Geomagnetic pole.

The original source of the image isn't known. Marco notes that some sources say it's a graphic from an unidentified "NASA video". But the scientific errors in the image cause Marco to doubt that.

Doing a Google image search, the earliest appearance of the image online that I could find is in a March 30, 2013 posting on the "Astro Bob" blog. That blog is run by Bob King, a photo editor for the Duluth News Tribune and amateur astronomer. He also credits the image to NASA, captioning it as an "Artist illustration of the northern auroral oval on planet Earth."

King doesn't provide a link to the NASA source, but he seems to know what he's talking about. So if he says it's a NASA image, I'm willing to take his word for it (in the absence of any other credible source info).

Perhaps the image used to be on a NASA site, but has since been deleted.

Here's where the image came from.

Whenever you're suspicious of an image, just reverse google image it.

Took about a minute to find the source.
Posted by Gav  on  Fri Feb 28, 2014  at  12:42 PM
Gav, I'm impressed! The reverse google search was the first thing I tried, but I didn't see that video in the search results. Did you simply upload the image, do the search, and that was it. The video was linked to directly in the results. Or was there some other search trick involved? I'm always curious to know what I may be doing wrong.
Posted by The Curator  in  San Diego  on  Sat Mar 01, 2014  at  05:44 AM
I figured out where that video is from. It is a NASA video, currently viewable on the JPL site:

Titled: Saturn's Aurora in a New Light
A Cassini scientist explains the flickering 'northern lights' high above Saturn, shown for the first time in a visible-light movie.
Posted by The Curator  in  San Diego  on  Sat Mar 01, 2014  at  06:04 AM
I am truely surprised that it does come from a NASA video: it has some very sloppy errors (like the auroral oval being centered on the true pole rather than on the geomagnetic pole).
Posted by LaMa  in  Europe  on  Sat Mar 01, 2014  at  09:55 AM
Commenting is not available in this channel entry.