This Day in the History of Hoaxes: August 29 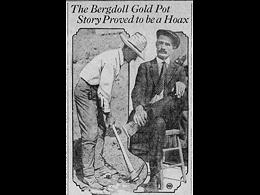 August 29, 1923: Grover Bergdoll's Gold
The claim that a road worker had discovered Grover Bergdoll's buried pot of gold prompted a two-day investigation by federal agents. But on this day in 1923, the story was revealed to be a practical joke among the workers that spun out of control. The pot of gold in question was believed to have been buried by the wealthy draft dodger Bergdoll in 1917. He escaped prison in 1920 by convincing his guards of its existence and then slipping free of them when they accompanied him to find it. Treasure hunters continued to look for it. But in 1939, after finally surrendering to authorities, Bergdoll admitted there was no buried pot of gold. [Pennsylvania Historical Society]