The Art of Fake News 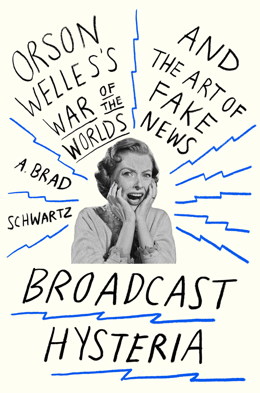 I have a new book to add to my reading list of hoaxes. It's Broadcast Hysteria: Orson Welles's War of the Worlds and the Art of Fake News, by A. Brad Schwartz, in which he re-examines the 1938 Panic Broadcast by looking at the letters sent to Welles himself in the days after the broadcast.

From the publisher's blurb:


Schwartz is the first to examine the hundreds of letters sent to Orson Welles himself in the days after the broadcast, and his findings challenge the conventional wisdom. Few listeners believed an actual attack was under way. But even so, Schwartz shows that Welles's broadcast became a major scandal, prompting a different kind of mass panic as Americans debated the bewitching power of the radio and the country's vulnerability in a time of crisis. When the debate was over, American broadcasting had changed for good, but not for the better.As Schwartz tells this story, we observe how an atmosphere of natural disaster and impending war permitted broadcasters to create shared live national experiences for the first time.

Schwartz has also posted a list over at huffpost of ten times when "fake news made real news" — from the 1835 Great Moon Hoax to the 2013 "Hack Crash" when the AP (due to having been hacked) tweeted a false report about a bombing attack on the White House.