We recently got to see an example of how a bogus fact takes root and spreads — that fact being that 10 percent of wall street workers are clinical psychopaths. 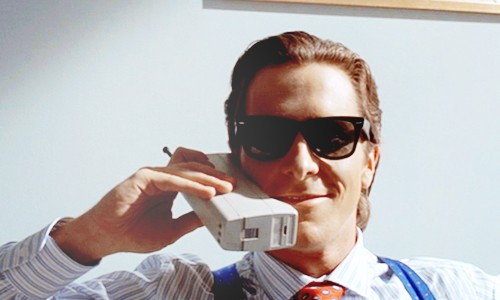 It started with a study titled "Corporate Psychopathy: Talking the Walk" published in the April 2010 issue of the journal Behavioral Sciences and the Law. Its lead author was Robert Hare, a specialist in the study of psychopathy. Hare had the opportunity to study 203 corporate professionals participating in a management development program. As part of this study, he conducted psychopathy assessments on the individuals, thus producing some of the first scientific data on psychopathy in the business world.

In the intro to the article, Hare noted that before his study almost no research had been conducted on psychopathic behavior in the business world, despite the widespread belief that, "Not all psychopaths are in prison. Some are in the Boardroom." This was because it was very difficult to obtain the cooperation of businesses. No company wanted to expose itself to outside scrutiny that might produce embarrassing revelations. Hare's study was only possible because he had cultivated a relationship with the company for many years. But even so, the company insisted on full anonymity. And Hare admitted that the group of 203 professionals was not a true representative sample of the business community. Still, it was better than nothing. 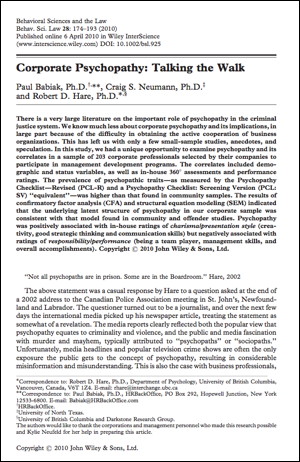 Hare's Results
Hare found that levels of possible psychopathy were somewhat elevated among the corporate professionals he studied — higher than one would expect to find in a sample of the general population:


"several investigators have used a PCL:SV score of at least 13 as an indication of 'potential' or 'possible' psychopathy... In our corporate sample 5.9% of the participants had a score this high, compared with 1.2% in the MacArthur community sample."
Furthermore, there were some interesting characteristics of those individuals who scored high for possible psychopathy:

"high psychopathy total scores were associated with perceptions of good communication skills, strategic thinking, and creative/innovative ability and, at the same time, with poor management style, failure to act as a team player, and poor performance appraisals (as rated by their immediate bosses)...

"our finding that some companies viewed psychopathic executives as having leadership potential, despite having negative performance reviews and low ratings on leadership and management by subordinates, is evidence of the ability of these individuals to manipulate decision makers. Their excellent communication and convincing lying skills, which together would have made them attractive hiring candidates in the first place, apparently continued to serve them well in furthering their careers."
Hare's data transforms into a bogus fact
An article titled "The Financial Psychopath Next Door" by Sherree DeCovny ran in the March/April 2012 issue of CFA Institute magazine. In this article, DeCovny declared:

"Studies conducted by Canadian forensic psychologist Robert Hare indicate that about 1 percent of the general population can be categorized as psychopathic, but the prevalence rate in the financial services industry is 10 percent."
It's not clear where DeCovny came up with the 10 percent figure. She seems to have invented it. Hare later told John Grohol, the editor of World of Psychology, that, "I don’t know who threw out the 10 percent, but it certainly did not come from me or my colleagues."

However, the 10 percent figure quickly caught on. After all, it's the kind of figure that sounds like it should be true. People want to believe it.

It was first repeated by an article in theweek.com, "Why is Wall Street full of psychopaths?" Then the news aggregators Business Insider and Huffington Post picked it up, spreading the bogus figure far and wide.

Finally, it landed in the opening paragraph of a May 12 op-ed by William Deresiewicz in the New York Times, Capitalists and Other Psychopaths.


THERE is an ongoing debate in this country about the rich: who they are, what their social role may be, whether they are good or bad. Well, consider the following. A recent study found that 10 percent of people who work on Wall Street are "clinical psychopaths," exhibiting a lack of interest in and empathy for others and an "unparalleled capacity for lying, fabrication, and manipulation." (The proportion at large is 1 percent.) Another study concluded that the rich are more likely to lie, cheat and break the law.
It was at this point that fact-checkers began to cry foul. A week later, the Times published a correction and altered the opening paragraph of Deresiewicz's piece to eliminate the bogus piece of information.

In its correction, the Times noted, "[Hare's] study found that 4 percent of a sample of 203 corporate professionals met a clinical threshold for being described as psychopaths, not that 10 percent of people who work on Wall Street are clinical psychopaths." This is interesting because I'm not sure where they're getting that 4 percent figure from. What I see in Hare's study (which I quoted above) is that he found 5.9 percent of his sample to meet the criteria of being possibly psychopathic.

Anyway, it's clear that it's incorrect to state as a fact that 10 percent of wall street workers have been found to be clinical psychopaths. Hare's study, from which the bogus fact derives, didn't examine wall street professionals. It didn't produce a 10 percent figure. And it wasn't a representative sample.

It's actually possible that 10 percent of wall street workers might be psychopaths. Or the figure might be even higher: 20 percent or 50 percent. We simply don't know, because a group of wall street workers has never been examined for this trait. And as Hare suggests, it's unlikely they ever will be, because no investment bank is going to throw open its doors to psychologists for a study of the psychopathic tendencies of its employees.

Links: A game of telephone fools the Times, cjr.org; How Crazy Is Wall Street, New York Times?, the Daily Beast.

A few years ago (2006) Babiak and Hare have published a very interesting book about psychopats and how they find a niche in the modern Corporate environment: "Snakes in Suits: when psychopats go to work". An absolutely worthwhile if chilling read.
Posted by LaMa  in  Europe  on  Wed May 30, 2012  at  12:41 PM
Jon Ronson's The Psychopath Test covers material along these lines.
Posted by Mark  on  Wed May 30, 2012  at  05:03 PM
I watched a good docu on BBC about good and evil. One of the leading researchers in that field actually found out that he had the classic genetic code that psycopaths have!