Early in his career, Muhammad Ali convinced the media that he regularly trained underwater. 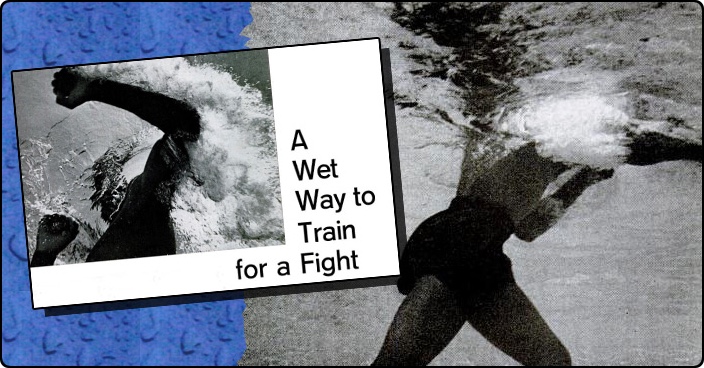 The Sept 8, 1961 issue of Life magazine featured a photo essay about a young boxer, 19-year-old Cassius Clay, who had an unusual training technique. He trained underwater.

Clay had recently won a gold medal in the 1960 Olympics, and since going pro he had won his first eight matches. He was also making a name for himself outside the ring as a charismatic and outspoken character.

In 1964 he would win the world heavyweight championship and change his name to Muhammad Ali, by which history remembers him better. But in 1961 Clay was busy training for his ninth match, against Alex Miteff who outweighed him by twenty pounds. However, Clay was confident that his underwater training would give him the edge in the ring. The text of the photo essay explained:


"Not to be bragging or anything like that," says 19-year-old Cassius Marcellus Clay, "but they say I'm the fastest heavyweight in the ring today. That comes from punching under water." Taking a cue from the immortal Ty Cobb, who weighted his shoes in training so that he would feel feather-footed when the season started, Clay goes into a swimming pool and, as these underwater pictures show, does a stunt of submarine shadowboxing. "You try to box hard," he explains, "Then when you punch the same way out of water you got speed."
Clay did proceed to beat Miteff, knocking him out in the sixth round. So evidently the underwater training worked. Except, no. Clay didn't train underwater. In reality, the photoshoot he did for Life was the one and only time he ever trained underwater. He had invented the story about underwater training as a stunt to get publicity.

However, for years no one questioned the claim about training underwater. It was simply accepted as part of the lore of Muhammad Ali. Until finally, around 1997, the photographer who did the photoshoot, Flip Schulke, revealed that Ali had invented the story. 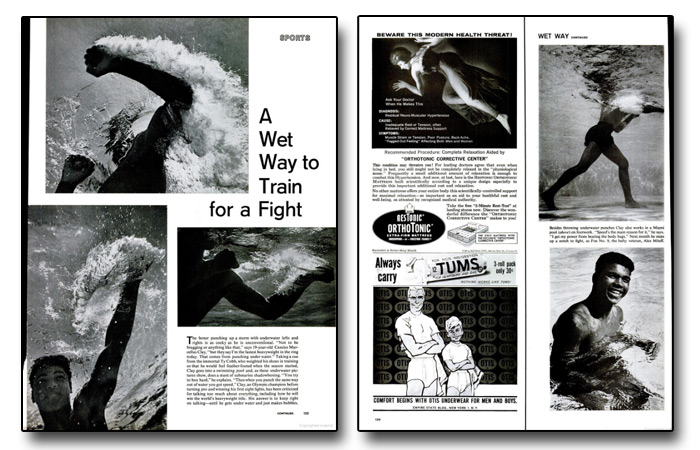 The Story of the Photoshoot
In 1961, Sports Illustrated had assigned Schulke to take pictures of Clay. So Schulke traveled to Overtown, Florida where Clay was training.

When he first met Clay, Schulke tried to impress the young boxer by sharing examples of his work. For instance, Schulke revealed that he specialized in underwater photography and had recently had photos published in Life showing water-skiers from below the surface of the water.

Seeing these photos, Clay immediately told Schulke that it so happened that he trained underwater in a swimming pool because, "An old trainer up in Louisville told me that if I practice in the pool, the water resistance acts just like a weight."

Clay demonstrated by jumping into the pool at the hotel where he was staying (The Sir John Hotel) and started to throw punches in the water.

Underwater training sounded plausible enough to Schulke, and he thought photos of it would make an interesting feature, so he pitched the idea to Sports Illustrated. But the editor there, as Schulke later said, "thought I was crazy for taking pictures of a boxer in a swimming pool."

However, the editor also gave Schulke permission to pitch the idea to Life, saying, "Go ahead and ask Life if you want to. If they're dumb enough to, let them do it."

So Schulke called Life, and they liked the idea. Schulke proceeded with the photoshoot. The pictures ran in Life. And they became among the most celebrated sports photos of all time.

One of the pictures (below) from that shoot, showing Clay fully underwater with his fists raised, is one of the most famous pictures of Ali ever taken. But it didn't run in Life because the editors there thought it looked too posed. 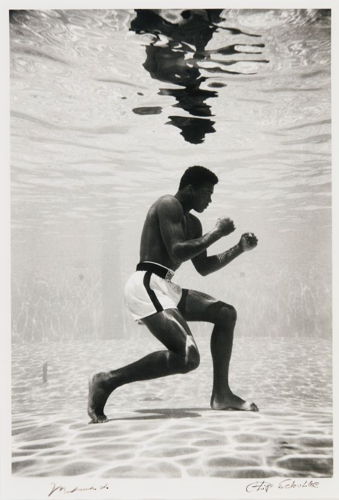 Schulke next met Clay three years later, after the boxer had won the world heavyweight championship. In his 2003 book Witness To Our Times Schulke described this meeting:


We were looking through a scrapbook, and when he came across my underwater pictures he winked at me. I realized he had taken me. I learned later he and his trainer had come up with the whole story on their own. He didn’t even know how to swim…. he fooled everybody - and it made fantastic pictures.

Muhammad Ali is master of his own p. r..