Alex from Target: hoax or the real deal? 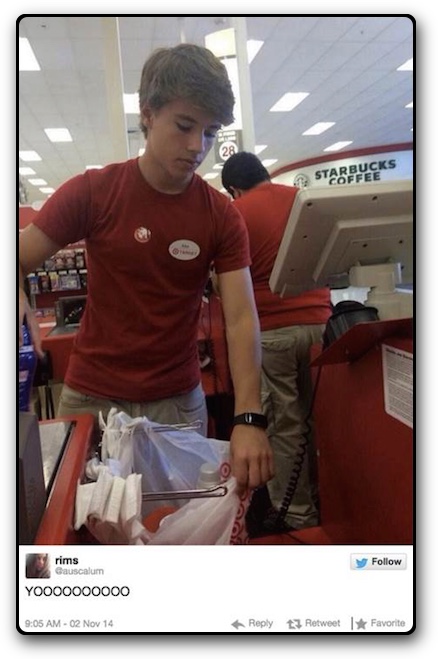 "Alex from Target" is the latest instant celebrity of the Internet age. He's a teenager who works at Target in Texas, and his real name is Alex LaBeouf. It's not entirely clear who took his picture as he was bagging groceries at Target, but a week ago a teen girl in London (Twitter user @auscalum) shared his picture on Twitter, captioning it, "YOOOOOOOOOO." Viral fame soon followed, because millions of other teen girls apparently couldn't get enough of how adorable Alex from Target was.

But was Alex's cuteness the only reason for his sudden fame? Maybe not.

Soon after Alex became famous, a marketing company called Breakr stepped forward claiming that they had actually engineered his instant celebrity as a social media experiment to demonstrate the influence wielded by teenage girls.

According to a post on Linkedin written by the CEO of Breakr, Dil-Domine Jacobe Leonares, his company made Alex famous by "spreading the word amongst our fangirl followers to trend #AlexFromTarget" as well as "tweeting about it to our bigger YouTube influencers."

The lesson of the experiment, concluded Leonares, was that, "if you can earn the love and respect from a global community such as the 'Fangirl' demographic - you can rally them together to drive awareness for any cause even if its to take a random kid from unknown to stardom over night."

And Breakr, presumably, was the company to turn to for anyone who wanted to tap into the power of the Fangirl demographic and harness it for their own ends.

The thing is, nobody seems to believe Breakr. Alex from Target insists he's never heard of them before. And the Twitter user @auscalum also denied knowledge of them, saying she found Alex's photo on tumblr.

So it looks like Breakr was trying to take credit for a spontaneous viral phenomenon that they had nothing (or very little) to do with.

Alex from Target, in other words, seems to be the real deal... in the sense that his internet fame wasn't a cynically manipulated marketing stunt.

Gorgeous Guy
But just because Alex from Target may have been real, that doesn't mean the Internet hasn't given us any fake viral "hot guys" in the past. Remember Gorgeous Guy?

Gorgeous Guy was a young man whose photo was posted on San Francisco's Craigslist message boards back in 2001. The photo was captioned, "Gorgeous Guy @ 4th and Market at the MUNI/Amtrak Bus Stop (Mon-Fri)."

It didn't take long for Gorgeous Guy's photo to go viral, leading to attention from the national media. But then journalist David Cassel started doing some snooping and came to suspect that something wasn't quite on the level with Gorgeous Guy.

Cassel discovered that all the initial posts about Gorgeous Guy on Craigslist, the ones that started the whole ball rolling, came from the same IP address, which coincidentally was the IP address of the company where Gorgeous Guy himself worked. Cassel suspected that Gorgeous Guy created an array of fake personas in order to artificially generate an online buzz about himself, perhaps in the hope of kickstarting a modeling career.

In his own defense, Gorgeous Guy insisted that he hadn't been responsible for the posts about himself, arguing that it was a prank played by his co-workers. And I've come to believe that explanation (over the years, I've had some email correspondence with Gorgeous Guy).

Nevertheless, whether it was Gorgeous Guy himself who wrote the initial posts or his co-workers, the buzz about him was artificially created.

Sorry. But I still believe it's fishy. I think we're being duped and there are confidentiality contracts etc involved with to keep Alex from revealing truth. Plus, he wants the fame.