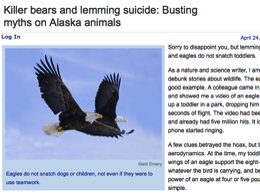 The Tundra Drums details some myths and hoaxes about Alaska wildlife. For instance:

Eagles do not actually snatch toddlers (they're too heavy). Nor are there any credible reports of eagles snatching up pet dogs.

Eagles' talons do not involuntarily lock. They can let go if they want. But often they choose not to let go, even if a big fish is dragging them through the water.

The 'majestic cry' of the eagle actually sounds more like a squeaky chirp. Which is why movies often dub in the call of the red-tailed hawk.

Lemmings do not commit suicide by hurling themselves, en masse, off cliffs.