Great name. Lousy product. Acme Worm Bouncer was widely advertised in the 1920s and 30s, with guarantees that it would quickly free farm animals of "blood-sucking, profit-stealing parasites." But the stuff was actually mostly charcoal. Governmental authorities eventually filed suit against Acme Feeds, Inc., the company that made the stuff, charging them with "misleading representations regarding its efficacy." [via The Quack Doctor] 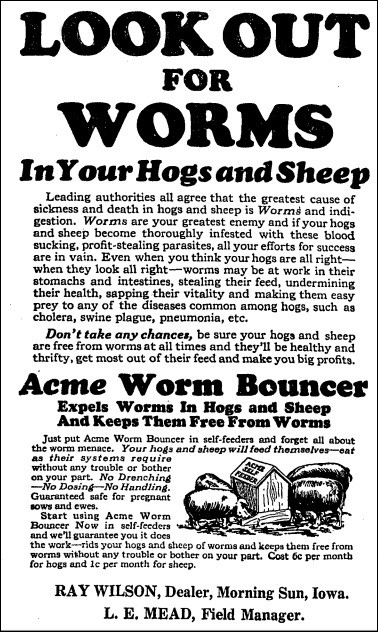 On February 2, 1940, the United States attorney for the Western District of Wisconsin filed a libel against five bags of Acme Worm Bouncer at Monroe, Wis., alleging that the article had been shipped in interstate commerce on or about November 28, 1939, and January 9, 1940, by Acme Feeds, Inc. from Forest Park, Ill.; and charging that it was misbranded.

The article was alleged to be misbranded in that the labeling bore representations that it was a "worm bouncer," that no drenching, dosing, handling, or starving were required, that it should be kept before pigs at all times to prevent reinfestation; that it was the only worm expeller on the market successfully fed in self-feeders; that chicks should be wormed when they are 8 weeks old, that 1 pound of the article should be used with every 100 pounds of Acme Growing Mash; that the birds should be kept confined in a separate house during treatment so that they could not pollute the yard with worm eggs and thus infest the other flocks; that if the birds are wormed too late the worms have a chance to develop and mature their eggs which would pass out and reinfest the birds before they recover from the first worming; that it should be used as a general worm treatment for laying flocks and if the flock is extremely wormy; that it would be efficacious for sheep and lambs that are in bad or unthrifty condition; that they should have free access to the article and that it would help to prevent scours and bloat; that a handful three times a day should be given to horses and colts until the worms were expelled and thereafter a handful should be given each day to keep the horses in good condition; and that it would be efficacious to remove the cause and would expel and prevent free intestinal worms and 90 percent of disease, which representations were false and misleading.

On March 12, 1940, no claimant having appeared, judgment of condemnation was entered and it was ordered that the product be destroyed.