The classic example of the "gag name" prank is to tell a reporter your name is "Haywood Jablome" — and hope the reporter doesn't think too long about what phrase that name sounds like. 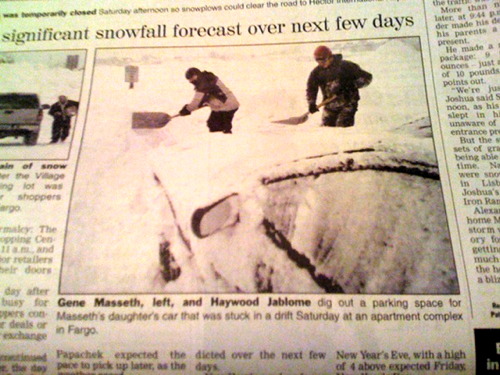 Haywood Jablome digging out a snowdrift. Fargo Forum - Dec 27, 2009
An older example: back in 1930, students at Cornell made headlines by getting politicians to praise the legacy of one "Hugo N. Frye" (you go and fry), supposed founder of the Republican party in New York state.

A more recent version of the prank occurred earlier this year when San Francisco station KTVU reported that the pilots of the crashed Asiana Airlines Flight 214 were "Captain Sum Ting Wong," "Wi Tu Lo," "Ho Lee Fuk," and "Bang Ding Ow." The station had apparently been told those names by an NTSB intern who was subsequently let go.

And the gag name prank has now again been in the news — but this time with an Arabic twist.

Following an armed robbery at the University of Houston, a TV correspondent for KTRK news interviewed a student who claimed to have been a witness. He told the reporter his name was "Abu Sharmouta."


Footage of this interview has become an "internet sensation" in the Middle East, because "Abu Sharmouta" was not the interviewee's real name. The phrase means "father of a whore" in Arabic. (I'm guessing it's the Arabic equivalent of "S.O.B.")

Not only did the interviewee give a false name, he also lied about having witnessed the crime. He was a U of H student who later explained he pulled the prank on the spur of the moment as a way to blow off steam during finals. [albawaba.com]

I'm giving this prank the thumbs down. It seems to me that the gag name prank becomes meaningless if you use foreign phrases that a reporter can't reasonably be expected to know. Though evidently it was humorous to Arabic speakers to hear this bogus name repeated on the news.

What's not funny about using an insult like that? I've used a choice phrase much like that as a name (French - "Go screw your mother") when dealing with a collection agency that would not take my word and a copy of a death certificate that my mother was dead and would not be paying a debt.
Posted by KDP  on  Thu Dec 19, 2013  at  01:20 PM
My favourite website (not spam, read the name)