A Case of Art Plagiarism

Art fraud typically involves the copying or imitation of famous artists. For instance, Han van Meegeren made millions by claiming that his paintings were actually newly discovered works by Vermeer. But the recent case of Rashidi Barrett shows that it's also possible to make money by copying the work of relatively obscure artists. 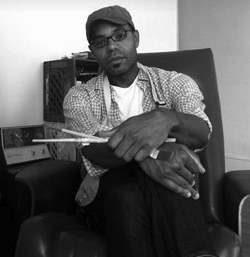 Rashidi Barrett (image posted on his website)
Barrett's work generated positive buzz when he began showing it in Norfolk, Virginia around 2011. He used his job DJ-ing to promote his work — he called himself DJ Cornbread — and soon he was having exhibits at local galleries where he managed to sell some pieces, earning himself a few thousand dollars. He described his own style as "comic and pop-iconistic."

But trouble began brewing for Barrett in early 2013 when a rival artist was looking at one of his paintings on display in Harrisonburg's Artful Dodger gallery — an image of a child in a swing hanging from the fingers of a giant hand — and realized he had seen it before. Some searching on the internet revealed it was nearly identical to a work by a Brazilian artist, Matheus Lopez Castro. The rival artist told the gallery manager who then began investigating Barrett's other pieces and soon found a dozen more that were rip-offs of works by other artists. Barrett, in other words, was guilty of art plagiarism.

When confronted with the evidence, Barrett admitted what he'd done and posted an apology on his website (which is now offline):


I have recently been cited for fradulence in a recent artshow regarding some of my works. I have profitted from someone else work both finacially and in reputation. The originator of the aforementoned works has been contacted by me personally disclosing a voluntary settlement, the issue in its entirety and the dialogue has been nothing short of awesome.

It was concluded that what was done was clearly a mistake and that this will certainly make me a better painter. I offer my apologies to the people involved that have been affected by this. This affects my reputation as an artist but more importantly as a man. I temporarily suspended my site to address this matter as I do not take it lightly. A new portfolio will emerge once the site is restored.
Barrett returned some of the money he was paid. Apparently he's also now decided to give up art and music and try to remake his life in another field. Based on the grammar and spelling of his apology, I'm guessing that field won't be writing.

Examples of some of Barrett's derivative works are below. 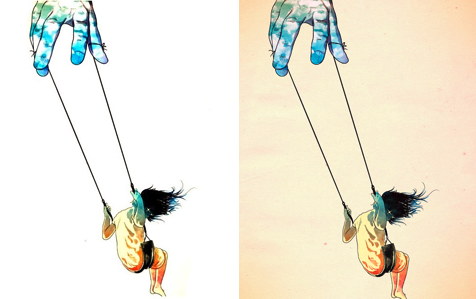 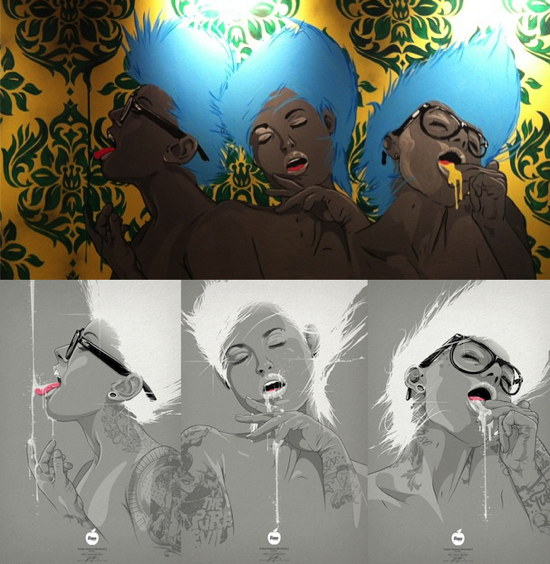 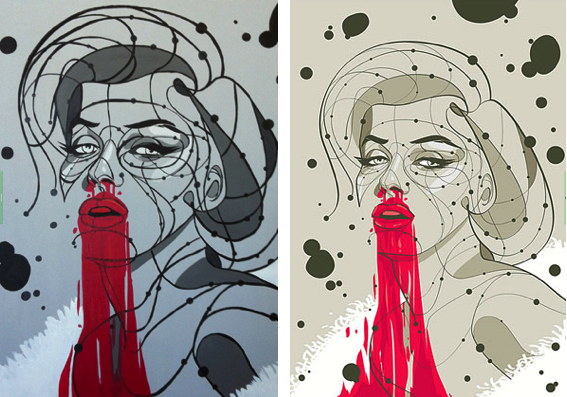 Yep that's BIG TIME theft and I'm pretty sure he ended up paying more in settlement payments than he 'earned/stole'. It takes a long time to create art, whether it's visual (this includes dance) or audio (music and screen writing). People only see or hear the final product and get the idea that the artist magically produced it in almost a moment.
Posted by hulitoons  in  Abingdon, Maryland  on  Tue Jan 29, 2013  at  08:10 AM
Crazy. I saw his work in the Museum of Contemporary Art--a huge honor for any up-and-coming artist--and I also went to school in the city where this story broke. That "apology" was actually written this past week after just ONE of his works was found to be fraudulent. Since then, he's put up another apology, and then took the site down after even more forgeries were discovered, all in the last week of January...so far, at least 12 different artists have been ripped off, and who knows how many more copies there are. He was literally selling un-altered prints as if they were his own, didnt even try to change the original. What's sad is that after being confronted with the first forgery, he didn't admit to the others until he was confronted with those as well.

Bottom line is this: every form of art uses appropriation in some form, but when you are going to appropriate or alter or use another artists IMAGE in any way, ask permission and give them credit. Otherwise, it's wrong, and you know it's wrong..ESPECIALLY IF YOU ARE MAKING MONEY OFF OF IT, AND MARKETING IT AS YOUR OWN. Just because "another artist" did it or got away with it doesn't make it justifiable! If you have to lie about where your original concept and composition is from, then you are smart enough to know what you are doing is a forged misrepresentation.


Here is an interesting article with his side of the story: