The following photo and caption has recently begun to circulate online. It's all over Facebook. 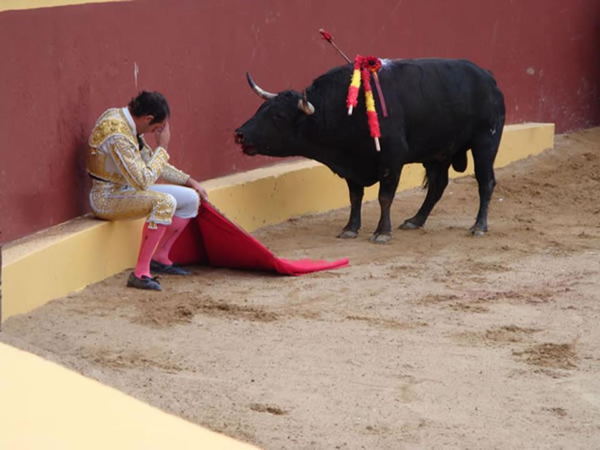 "And suddenly, I looked at the bull. He had this innocence... that all animals have in their eyes, and he looked at me with this pleading. It was like a cry for justice, deep down inside of me. I describe it as being like a prayer - because if one confesses, it is hoped, that one is forgiven. I felt like the worst shit on earth."

This photo shows the collapse of Torrero Alvaro Munera, as he realized in the middle of his last fight... the injustice to the animal. From that day forward he became an opponent of bullfights.
I haven't been able to figure out where the photo originally came from, but it definitely doesn't show Alvaro Munera's moment of epiphany during a bullfight. Munera is an ex-bullfighter who's become an animal-rights activist. But (as described in an article about him on open.salon.com) his career ended not from a moment of zen communion with a bull, but rather in 1984 when a bull caught him and tossed him in the air, resulting in a spinal-cord injury that left Munera paralyzed.

I've seen another version of the photo and quotation that attributes the words to "Fabian Oconitrillo Gonzalez". But I have no idea who he might be. If he's a bullfighter, I haven't been able to find out anything about him.

This looks like just the opposite of what's claimed - a typical bit of macho showboating by a bullfighter just before he finishes the animal off.
Posted by JonMac  on  Thu Mar 08, 2012  at  12:54 PM
hahaha.
Posted by ghd123  on  Thu Mar 08, 2012  at  10:52 PM
There's a Fabian Oconitrillo Gonzalez in Costa Rica who's signed lots of cruelty-to-animals-related petitions, according to change.org. This may be him, apparently a tech at HP with no apparent connection to bullfighting: https://www.facebook.com/profile.php?id=1653848617 In any case, I figure if one instance is (maybe deliberately) misattributed, any further instances are suspect...
Posted by David Harley  on  Fri Mar 09, 2012  at  05:46 AM
http://fiskeharrison.wordpress.com/2012/03/08/this-photo-is-not-what-it-seems/#more-2843