A viral image claims to show a 140-year-old tortoise wearing her 5-day-old son as a hat. Is this true or false? 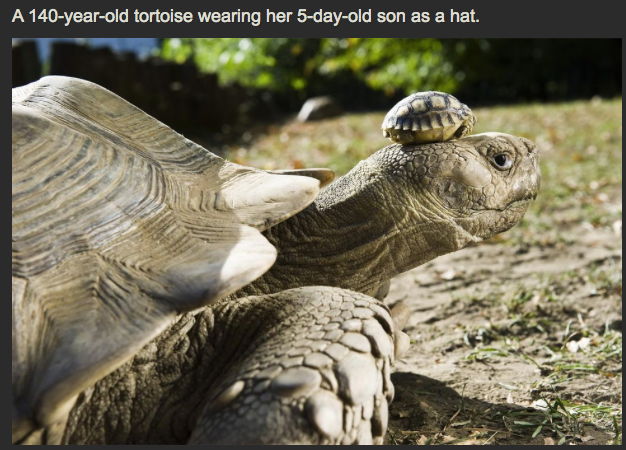 The image is real, in the sense of being not photoshopped or otherwise digitally manipulated. It dates from September 2011 when the Nyiregyhaza Animal Park (also known as the Sosto Zoo) in Hungary was showing off the eight baby African spurred tortoises that had recently been born there. The photographer put one of the babies on the head of its mother, and snapped a few photos, and these made their way into a variety of media sources.

But the caption about the mother being 140 years old — that's another story.

Biologically speaking, it's not impossible for a tortoise mother to be 140 years old. In an older part of the Museum of Hoaxes, I have the Gullibility Test, which I posted a long time ago (I think it was around 2001). One of the questions on this test was: "Turtles never die of old age — True or False?" (Assume 'turtles' here is being used in the generic sense to describe both turtles and tortoises.)

The answer was, it's true.


Turtles [and tortoises] exhibit what is known as 'negligible senescence.' Unlike humans, they do not continue to age once their bodies reach maturity. In theory, they might be able to live forever, though in practice this would never happen. Injury, predation, or disease eventually kill them. But turtles have been known to live beyond 150 years without exhibiting any signs of old age. Fish and amphibians also share this enviable characteristic.
So turtles and tortoises can continue to reproduce at very old ages. However, none of the stories in the media mentioned that the mother tortoise at the Nyiregyhaza Animal Park was 140 years old, which seems like it would have been an interesting fact to mention, if it had been the case.

The only article to mention anything about the age of the tortoise was the Daily Mail (ok, not the most reliable source), which said, "Their lifespan [i.e. African spurred tortoises] is between 30 and 50 years, with the oldest one in captivity thought to have survived to 54."

I think the Daily Mail was actually wrong about the lifespan of this type of tortoise. Wikipedia says, "The lifespan of an African spurred tortoise is about 50–150 years, though they can live much longer." And it adds, "The oldest in captivity is 54 years, located in the Giza Zoological Gardens, Egypt, 1986." That sounds more correct.

I've emailed the zoo to inquire about the age of their mother tortoise. But in the meantime, I think it's safe to assume that it was not 140 years old.