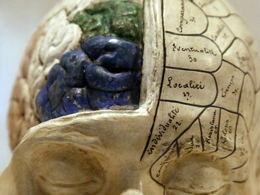 In an article in The Atlantic, Sam McDougle traces the origin of the often repeated belief that "you only use 10 percent of your brain." He writes:


"According to Sam Wang, a neuroscientist at Princeton and the author of Welcome to Your Brain, the catalyst may have been the self-help industry. In the early 1900s, William James, one of the most influential thinkers in modern psychology, famously said that humans have unused mental potential. This completely reasonable assertion was later revived, in mangled form, by the writer Lowell Thomas in his foreword to the 1936 self-help bible How To Win Friends And Influence People. “Professor William James of Harvard used to say that the average person develops only 10 percent of his latent mental ability,” Thomas wrote. It appears that he, or perhaps someone else in his day, simply plucked the golden number out of the sky."
Although McDougle doesn't mention this, the 10% myth is also often traced back to the work of Karl Lashley in the 1920s. For instance, Dr. Eric Chudler of the University of Washington notes: "Perhaps it was the work of Karl Lashley in the 1920s and 1930s that started it. Lashley removed large areas of the cerebral cortex in rats and found that these animals could still relearn specific tasks."