UFO Over Santa Clarita — What part of this UFO sighting has been faked?


The answer is that the UFOs are, of course, fake, but so is everything else. Every part of this video — the car, the scenery, the clouds — is CGI. Wired explains:


"UFO Over Santa Clarita" was a painstakingly crafted joke played by Aristomenis "Meni" Tsirbas, the director of the 2007 computer-animated film Battle for Terra who has also contributed visual effects and animation work to movies like Titanic and Hellboy and several Star Trek television series. A long-time champion of "photorealistic" CGI, Tsirbas and his team spent about four months mimicking the look of an accidental extraterrestrial encounter captured on a smartphone. And until now, Tsirbas hadn't revealed the truth to anyone outside a handful of friends.
"The point of the video was to prove that CGI can look natural and convincing," Tsirbas told Wired. "Everybody assumes the background and car are real, and that the UFOs are probably fake, especially the over-the-top mothership at the end. The general reaction is disbelief, so I usually have to prove it by showing a wireframe of the entire shot to prove that nothing is real."

Posted: Sat Feb 09, 2013.   Comments (0)
The Coke Bag Hoax — Recently a video began circulating that appeared (despite suspiciously poor production values) to be an advertisement by Coca-Cola announcing a new "Coca-Cola-Bag." The idea was to do away with selling Coke in bottles and switch to biodegradable plastic bags made "in the unique Coca-Cola bottle shape."

The video claimed the idea came from Central America where many consumers supposedly already buy Coke in plastic bags in order to avoid paying the bottle deposit.

Gizmodo, Digital Journal, and WKMG Orlando were among those who posted about the video.

But Just-Drinks.com now says it has received confirmation from the Coca-Cola Co. that the Coke Bag is a hoax — though not one Coca-Cola was responsible for. The company says it has no idea who created the video.

Given the references to Central America, and the idea of Coke bags, I'm guessing the video may be an elaborate drug-themed joke. 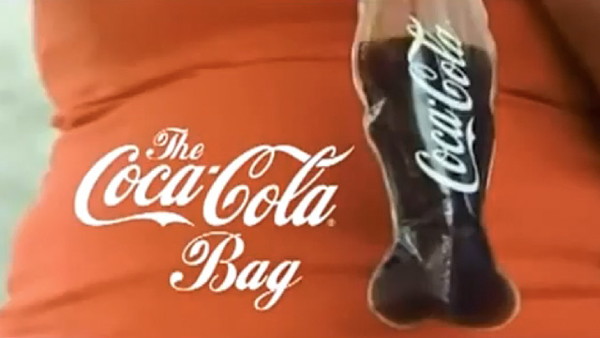 Posted: Tue Jul 10, 2012.   Comments (4)
The Malfunctioning Oil Rig Drink Dispenser Hoax — On June 7, an Occupy Seattle activist, Logan Price, posted a video online that appeared to show an embarrassing scene from a private party of Shell Oil executives. Price explained, on his twitter page, that he had managed to infiltrate the party, which was intended to celebrate the launch of Shell's Arctic drilling program, and which was hosted at the top of the Seattle Space Needle. 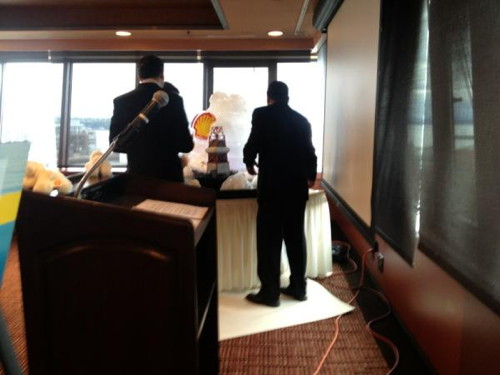 "Turn it off!" an executive demanded. "I can't turn it off," another replied.

Soon after Price posted it, the video went viral online, spread by bloggers and news sites including Tree hugger, Seattle Post Intelligencer, Gothamist, Gizmodo, and Gawker. The symbolism seemed too perfect — an oil rig drink dispenser springs a leak at the launch party for an oil drilling program!

Of course, it was all just a little too perfect. Soon after being released, the video (as well as the entire event) was exposed as a hoax. Bloggers realized that the pr firm that had supposedly organized the event, Wainwright & Shore, wasn't a real pr firm. Its website had only recently been created. The hoax was traced to the activist group the Yes Men, working in collaboration with Occupy Seattle and Greenpeace. These groups took full credit for the hoax, and even posted another video showing a behind-the-scenes look at the making of the stunt. The elderly spray victim in the video turned out to be Dorli Rainey, an 84-year-old woman who had recently gained fame as a pepper-spray victim during a protest rally. 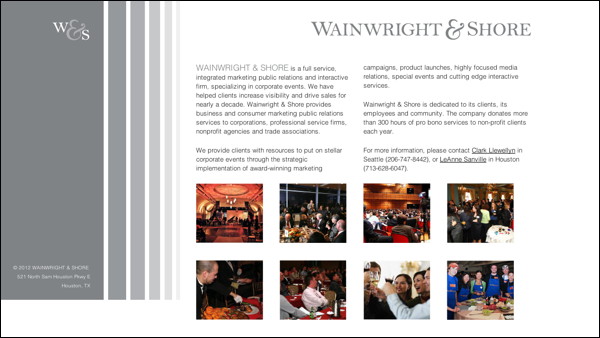 Wainwright & Shore, a phony PR firm
In a follow-up to the hoax, news outlets and some blogs received a statement appearing to come from Shell Oil denouncing the hoax. This statement also turned out to be a hoax.

Following the video hoax, the Yes Men also unveiled a hoax website, ArcticReady.com. The site purported to be an official Shell site touting how the melting of the polar ice caps, while unfortunate for the planet's climate, also offered exciting opportunities for new oil drilling. Shell Oil is, in fact, taking advantage of polar melting to start new drilling. 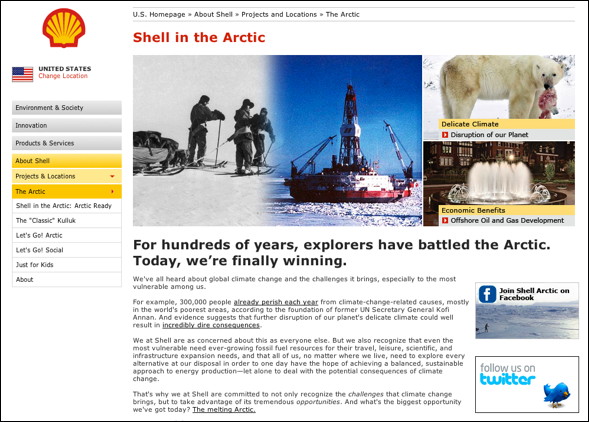 Posted: Tue Jun 12, 2012.   Comments (0)
The Angel in the Shopping Mall — Over at livescience.com, Ben Radford analyzes a video that supposedly shows an angel falling to the floor of an Indonesian shopping mall. The video is said to have been taken on Sep 11, 2011.

Radford concludes that whoever created the video (and he's sure it's a fake) got the lighting all wrong when they inserted the animated angel.


Light sources near the top of the frame are clearly reflected in the polished, semi-glossy floor (which appears to be painted and sealed concrete), though when the brightly luminous figure falls to the floor, its light does not appear in the foreground on the right of the scene, where its reflected light should be.
He also quotes Derek Serra, a Hollywood visual effects artist, who notes: "look at the light hitting the building behind it: given its movement, we would see high contrast shadows from the window frame and tree move across the inside of the building as the light moves around, but those shadows are conspicuously absent."

Of course, true believers might respond that angelic light doesn't behave the same way that normal light does.

Regardless, the only real mystery remaining here is who created the video, and why.

Posted: Fri May 18, 2012.   Comments (2)
Russian Girl Floats Up Into The Air — Either it's a hoax, or a muggle wandered across a wizarding lesson. (via HuffPost)


Thirty-two years ago the tiny town of Eucla, Australia, on the edge of the Nullarbor plain, became famous when a few of its residents first sighted the Nullarbor Nymph. The Nymph was a blonde, feral, half-naked woman who lived in the bush and ran wild with kangaroos. News of this wild woman quickly spread around the world.
Now filmmaker Matthew Wilkinson has brought the legend to the screen. ABC News quotes him as saying:


It was sort of a male fantasy sort of story that there was this blonde, beautiful woman out there. I guess I saw the Nullarbor Nymph as our version of Bigfoot or the Loch Ness Monster. I was always sort of surprised that no-one my age knew about it and so I really wanted to tell that story for a younger generation.
The film just premiered. Based on the trailer, it looks like an instant classic.


Posted: Mon Jan 16, 2012.   Comments (2)
Quantum Levitation Car Racing — A video of a race between miniature cars floating above a track by means of "quantum levitation" was recently debunked. The intro screen to the video credited it to the (fictitious) "Japan Institute of Science and Technology," but the true creator was Sony and SCE Studio Liverpool. The Business Insider says: "the video was a ploy by Sony and developer SCE Studio Liverpool to promote the Wipeout 2048 game that's coming out on the PS Vita."

I'm assuming the video was inspired by a demonstration of "quantum levitation" conducted by the superconductivity group at Tel-Aviv University and posted on youtube a few months ago.


Posted: Wed Jan 11, 2012.   Comments (2)
Visit Denmark, and get a girl pregnant — As posted recently by LaMa in the forum, a video recently began to circulate that appeared to have been created by a Danish girl who was trying to find the father of her child. She said the father had been a tourist in Denmark. They had had a one-night stand a year ago.

Turns out the video was actually created by Denmark's National Tourist Agency as part of a viral marketing campaign. The tourist agency has since issued an apology:


Local media reported yesterday the woman is actually an actress named Ditte Arnth Jorgensen and the baby "August" is not hers. The revelation caused outrage in the country, with one newspaper labelling the stunt "grotesque". VisitDenmark CEO Dorte Kiilerich said the aim of the viral advertising campaign was to create a positive view of Denmark.
As a publicity stunt, I'd say the campaign was highly effective. But in terms of encouraging people to visit Denmark, I'm not so sure.

Posted: Wed Sep 16, 2009.   Comments (17)
Jackson Video a Hoax Experiment — A short video that appeared on youtube a week ago showed someone resembling Michael Jackson getting out of the back of a coroner's van. Evidence perhaps that Jackson faked his death? Nope. German television station RTL subsequently admitted they faked the video as an experiment "to show how easily users can be manipulated on the Internet with hoax videos." An RTL spokesman said: "Unfortunately, many people believed it was true, even though we tried to create the video in a way that every normal user can see right away that it is a fake."

Hoaxes designed to demonstrate the gullibility of the public are an old phenomenon, going back at least to HL Mencken's 1917 bathtub hoax. The public invariably lives up to expectations.

Posted: Wed Sep 02, 2009.   Comments (6)
Golf Trick Shot — The latest viral video going around is titled "Hot Girl Pulls Off Insane Golf Trick Shot." Is it real? I'm not sure, but I don't see why it couldn't be. The trick doesn't seem that insane to me.


Posted: Thu Jul 09, 2009.   Comments (17)
The Photoshop Effect — This video exposing the "Photoshop Effect" (how photoshop is used to make models look more perfect than they really are) seems to be a thinly veiled excuse to put an attractive model in front of the camera and then photoshop her. That's good enough for me.


Posted: Wed Jun 24, 2009.   Comments (10)
Domino’s Video Prank — One of the mysteries of law enforcement in the age of YouTube: Why do people proudly post videos of themselves engaged in illegal acts? They're just begging to have the police come knocking on their door. So anyway, the latest example of video self-incrimination involves two Domino's employees who created a prank video showing one of them farting on the food and sticking it up his nose as the other one laughed and egged him on. They posted the video on YouTube and it promptly went viral. Domino's then fired them (the two had to see that coming). One of the two emailed the company a groveling apology: “It was fake and I wish that everyone knew that!!!! I AM SOO SORRY!” Nevertheless, Domino's is still planning to press felony charges against them. The video has now been removed from YouTube, but Consumerist still has a copy of it posted. [NY Times]

Posted: Thu Apr 16, 2009.   Comments (4)
Sixty-Inch Box Jump — If memory serves (and it might not), there was once a discussion on the site about the maximum height a person could jump without a running start. Cody Ransom of the Yankees has to be in the upper percentile of the jumping range. Apparently this video is not doctored in any way.