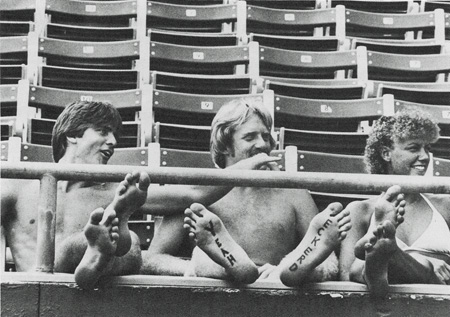 This photo of fans at a college baseball tournament was published in the St. Petersburg Evening Independent. What was not revealed to readers was that the photographer, Norman Zeisloft, had staged the scene by asking the fan to write the phrase "Yeah Eckerd" on the soles of his feet.

With the fan's assent, Zeisloft had first tried to write the phrase himself, but his pen wouldn't write on the man's dirty soles. The fan subsequently washed his feet, wrote the words, and posed for the picture. But unbeknownst to Zeisloft, a rival photographer had taken a photo of him initially trying to write the phrase. This photo is what later implicated Zeisloft in staging the scene.