Soon after September 11, 2001, a sensational photo began circulating via email. It showed a tourist posing for a snapshot on top of the World Trade Center as a hijacked plane approached from behind. An accompanying caption explained that the photo came from a camera found in the rubble of the world trade center. Apparently the photo had been taken just seconds before disaster struck. 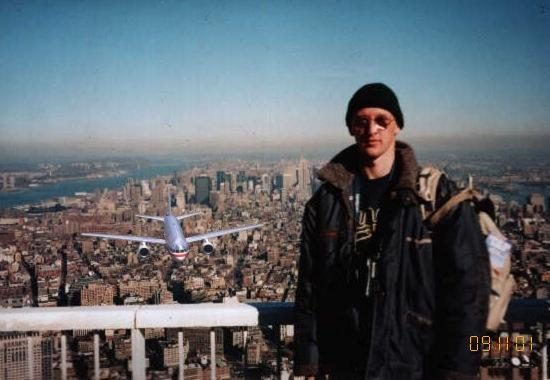 "We've seen thousands of pictures concerning the attack. However, this one will make you cringe. A simple tourist getting himself photographed on the top of the WTC just seconds before the tragedy ... the camera was found in the rubble!!"


The image quickly circulated to millions of people. It received attention from both national and international media. Perhaps the source of the fascination with it (besides its remarkable subject matter) was that it counterposed a scene of such innocence (a tourist posing for a holiday snapshot) with a scene of such horror (the hijacked plane approaching from behind). In this way, it evoked the prevailing feeling in America immediately following the attack—a feeling of having been wrenched from an age of innocence into a new nightmare reality. The picture also spoke to the surprise nature of the attack (the tourist's back is turned, and he seems unaware of the fate that is soon to engulf him).

Absolute proof of the photo's lack of authenticity came when online sleuths realized that the plane in the photo had been digitally cut-and-pasted from a photo taken by Jonathan Derden, available on airliners.net.


The Spoofs
The popularity of the "tourist guy" photo inspired the creation of numerous parodies. The initial spoofs placed the tourist guy in other historical tragedies, such as the hindenburg disaster. Or people replaced the airplane with other menacing entities, such as the StayPuff Marshmallow Man (a reference to the movie Ghostbusters). Eventually, Tourist Guy became such a widely recognized pop-culture icon, that people were depicting him popping up in just about any photo at all, as a visual gag.

Below is a sample of some of the Tourist Guy parodies.


Who was Tourist Guy?
In the months following the appearance of the 'Tourist Guy' photo, a worldwide search ensued to discover who the man in the picture really was.

Jose Penteado: Not the Tourist Guy In November 2001, a Brazilian man came forward suggesting that he might be Tourist Guy. He denied ever having posed for a picture on top of the World Trade Center, but he certainly looked like the guy in the picture. Penteado theorized that some of his friends must have pasted his face onto someone else’s body. Based on the possibility that he might be the guy, Volkswagen's Brazilian subsidiary offered him a spot in a television commercial, though they later thought twice about the wisdom of associating themselves with the World Trade Center disaster and rescinded the offer.

A few weeks later a far more convincing candidate came forward. The friends of a Hungarian man named Peter Guzli identified him on a Hungarian news site as the real Tourist Guy. Guzli then supplied Wired Magazine with photos of himself posed in other areas of the World Trade Center observation deck. He explained that he had snapped the famous photo of himself (minus the airplane) while on vacation in November, 1997. Following September 11, he pasted the plane into the background, intending the visual gag as a bit of dark humor to share with his friends, little realizing that his creation would soon spread around the world and be seen by millions of people. He told Wired, "This was a joke meant for my friends, not such a wide audience."

Yo, balcony boy
over your right shoulder's trouble
have a parachute?
(by Mike M.)

Take my picture please?
This my first time in U.S.
Hey, where you going?
(by Jacy Webster)

No longer afraid
Of heights, beat that silly fear
It is great up here!
(by John)