The Tip of the Iceberg 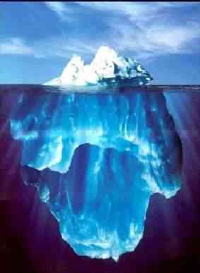 This image was created by professional photographer Ralph Clevenger. He's been quoted as saying:
"I created the image as a way of illustrating the concept of what you get is not necessarily what you see. As a professional photographer I knew that I couldn't get an actual shot of an iceberg the way I envisioned it, so I created the final image by compositing several images I had taken. The two halves of the iceberg are two separate shots, one taken in Alaska and one taken in Antarctica (neither is underwater). The only underwater part is the background taken off the coast of California. The sky is the last component. It took a lot of research on lighting and scale to get the berg to look real."
Clevenger intended the photo to be a work of art. He never claimed it was an unmanipulated photo. However, it subsequently found its way online where someone appended a caption stating that the photo "came from a Rig Manager for Global Marine Drilling in St. Johns, Newfoundland. They actually have to divert the path of these things away from the rig by towing them with ships!" Global Marine Drilling is a real company, but it had nothing to do with this photo.
Links and References
Ralph Clevenger Photography.
Photo Categories: Composite Images, False Captions, Art, Snow and Ice, viral images, 2000-2004
Tweet