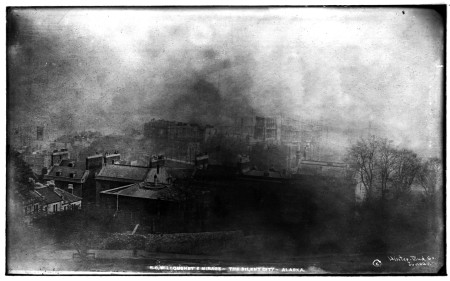 Alaskan prospector Dick Willoughby claimed he snapped this photo in June 1888 while looking out over Muir Glacier in southeastern Alaska. He said that it showed a mirage of a "silent city" that could be seen emerging from the mists. He speculated that the city was actually the reflection of a real city thousands of miles away in Russia.

The photo attracted controversy in 1889 when San Francisco papers acquired copies of it. Photographic experts were skeptical, and Prof. Otto J. Klots, chief astronomer of the Department of the Interior at Ottawa, insisted that "such a thing as the reflections of a city thousands of miles away would be an utter impossibility."

Nevertheless Willoughby managed to sell thousands of copies of the picture and took many people on guided tours to see the mirage. However, when the San Francisco Examiner sent a correspondent to track down the mirage, he couldn't find anything.

The San Francisco Chronicle eventually solved the mystery when an employee of Wells Fargo notified them that he recognized the scene as the skyline of Bristol, England, "the view being from a public park on Brandon Hill. There is a Catholic cathedral there, the main building of which was completed about two centuries ago."

Apparently Willoughby had acquired a blurry photo of Bristol from a stranded English photographer, whose equipment he bought for $10, and he came up with the idea of passing off the photo as an image of a "silent city" mirage. Even after the photo had been debunked, interest in it (and the supposed mirage) continued. In 1890 Willoughby sold the negative to a San Francisco photographer for $500. Willoughby died two years later.
Links and References
• Alaska State Library. Photo Number: PCA 87-2738.
• "The Silent City: An iconoclastic professor says it is a humbug." (Oct 6, 1889.) LA Times.
• "Puzzled by a Photograph." (Jul 21, 1889). The New York Times.
• "Identity of the Silent City." (Oct 20, 1889). The New York Times.
• McKinney, Debra. (Nov 6, 1994). "The Silent City." Anchorage Daily News.
Photo Categories: False Captions, Landscapes, Before 1900
Tweet