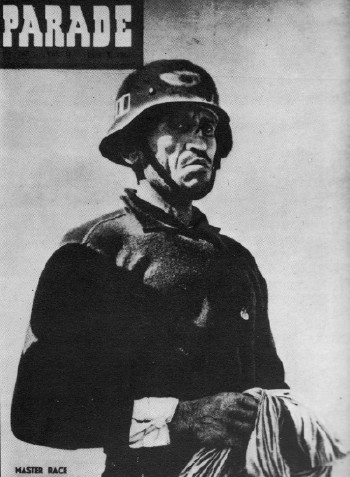 The May 8, 1943 cover of the British illustrated magazine Parade showed an unkempt, dour-looking German soldier on its cover with the satirical caption, "Master Race." This cover ran as the German army was beginning a general retreat.

However, the man in the picture was not actually a German soldier. The photo was a piece of government propaganda created by the British Army Film and Photographic Unit. Derek Knight, who was at the time an employee of this unit, later admitted that the man was "the ugliest Arab they could find in the streets of Cairo and whom they dressed up in a sort of uniform."
Links and References
• Parade. (May 8, 1943.) 143(11).
• Jaupert, Alain. (1989). Making People Disappear: An Amazing Chronicle of Photographic Deception. Pergamon-Brassey's: 177.
Photo Categories: Staged Scene, Magazine Covers, Military, War, Photojournalism, Striking a Pose, 1940-1959
Tweet