The Kiss at City Hall 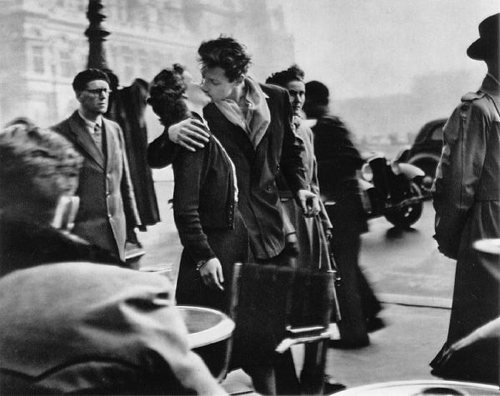 A couple kisses passionately on a city street, oblivious to the pedestrians passing by. The image is one of the most famous in the world, reproduced on countless posters and coffee mugs. It was taken on April 1, 1950 by Robert Doisneau, on assignment for Life magazine, outside Paris' City Hall.

The photo was published in the June 12, 1950, issue of Life, but only became famous when it was republished in poster form during the 1980s. Doisneau steadfastly maintained it was a spontaneous scene, fortuitously caught on film. This greatly added to its appeal.

But in 1993 Doisneau was sued by Jean-Louis and Denise Lavergne, who claimed to be the couple in the scene. They demanded compensation for having their picture taken without their knowledge. In court Doisneau confessed he had actually used professional models to stage the scene, but the models were not the Lavergnes. They were Francoise Bornet (nee Delbart) and Jacques Carteaud. The Lavergne's case was dismissed.

Francoise Bornet subsequently sued Doisneau, seeking a percentage of the photograph's sales, but her case was also dismissed due to the fact she had waited forty-three years to make a claim. Jacques Carteaud, who had since become a winegrower, did not join her case. He noted that Doisneau had paid them 500 francs at the time, which he regarded as fair payment for their work.
Links and References
• Whose Kiss Is This? 43 Years Later, 3 Sue. (April 29, 1993). The New York Times.
• Paris, Mon Amour. (July 2005). Smithsonian Magazine.
Photo Categories: Staged Scene, Art, Romance, 1940-1959
Tweet