The Brown Lady of Raynham 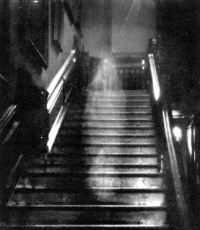 This is one of the most famous ghost photos of all time. It supposedly shows the "Brown Lady" who haunts Raynham Hall in Norfolk, England.

The image was taken by Captain Provand and Indre Shira (a pseudonym), two photographers on assignment for Country Life magazine. According to their later testimony, the pair saw an ethereal form descending the staircase and quickly snapped a picture.

Skeptics argue that the photo does not show a ghost, but rather was the result of mundane causes such as camera vibration, afternoon light from the window above the stairs catching the lens of the camera, and double exposure. What is not known is whether these effects were produced purposefully, or if they were the accidental result of a faulty camera.