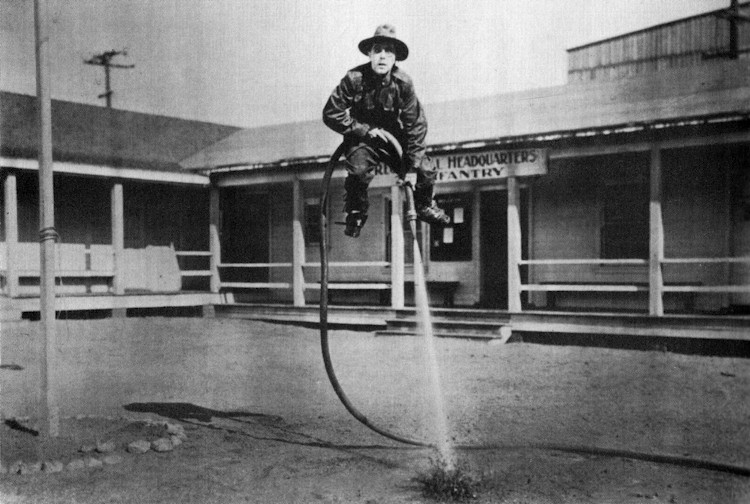 A soldier appears to be lifted in the air by the pressure from a water hose.

Mark Sloan, in his book Hoaxes, Humbugs, and Spectacles (1990), dates this image to circa 1923. He credits it to "The New York Times; courtesy National Archives and Wide World Photos."

It's very unlikely the soldier actually was lifted in the air by the pressure from the hose. For a start, the blast from the hose is not directed at his center of gravity. Therefore, it would not be pushing him upwards.

Some have noted that the soldier resembles Buster Keaton. If it is Keaton, then this may be a scene from a movie, in which case the effect most likely was created with hidden wires.

Another possibility is that an image of a man with a hose was cut from another picture (perhaps of him sitting on top of a wall) and inserted into the background scene of the infantry headquarters.

Although the picture was obviously intended as a joke, its status is listed as undetermined since it isn't clear what technique was used to create it.
Links and References
Sloan, M. (1990). Hoaxes, Humbugs, and Spectacles. Villard Books: p.114.
Photo Categories: Humor, Striking a Pose, Undetermined Status, 1920-1939
Tweet