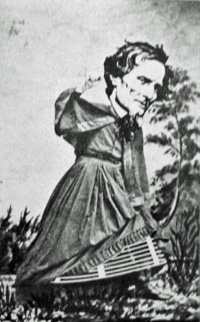 Jefferson Davis, President of the Southern Confederacy, was captured by Union forces on May 10, 1865. According to legend, he was caught while trying to flee disguised as a woman. The reality is less colorful. Davis later explained that, when he heard the Union soldiers approaching, he grabbed what he thought was his overcoat and stepped outside. But it was very early morning, and in the darkness he had grabbed his wife's coat by mistake.

The Northern media pounced on the idea of Davis fleeing in feminine disguise, and exaggerated it to suggest that Davis was wearing a skirt, not merely a woman's overcoat. Since there were no photographs of Davis's capture, the Kellogg Brothers, Connecticut-based photographers, printed up satirical "carte-de-visites" showing Davis in women's clothing. They first photographed a model in a hoop skirt, brandishing a knife in her hand. Then they pasted Davis's head onto the body.
Links and References
Collins, K. & Wilsher, A. (July/Sep 1984). "Petticoat Politics: The Capture of Jefferson Davis." History of Photography. 8(3): 237-242.
Photo Categories: Composite Images, Head Transplants, Politics, Before 1900
Tweet