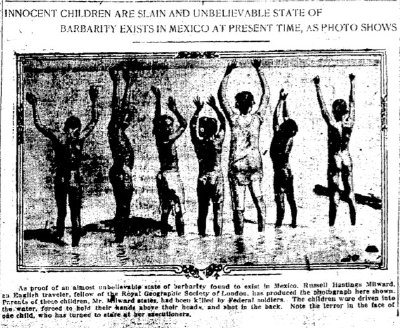 Newspaper tycoon William Randolph Hearst was notorious for allowing his newspapers to recaption photos creatively. In 1913 one of his papers, the New York American, ran a photo of children, their hands raised above their heads, standing in the ocean. Many other papers then reprinted the photo. The caption read:


As proof of an almost unbelievable state of barbarity found to exist in Mexico, Russell Hastings Milward, an English traveler, fellow of the Royal Geographic Society of London, has produced the photograph here shown. Parents of these children, Mr. Milward states, had been killed by Federal soldiers. The children were driven into the water, forced to hold their hands above their heads, and shot in the back. Note the terror in the face of one child, who has turned to stare at her executioners.
The picture had not been altered, but the caption was entirely false. Milward protested that, in reality, the children had been playing happily, and that they had raised their arms at his request in order to make a better picture. What's more, the photo was taken in British Honduras, not Mexico.
Links and References
December 27, 1913. The Lima Daily News.
MacDougall, C. (1958, 2nd ed.). Hoaxes. Dover Publications: 245.
Photo Categories: False Captions, Children, Death, Photojournalism, War, 1900-1919
Tweet