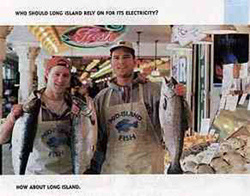 Keyspan Energy Corp ran an ad in Newsday in which it used this picture (apparently of Long Island fishmongers) to express its commitment to the people of Long Island. The concept was that local businesses should rely on a local company for their electricity. But astute readers soon noticed that the fishmongers were holding up King Salmon, a species found only in the Pacific.