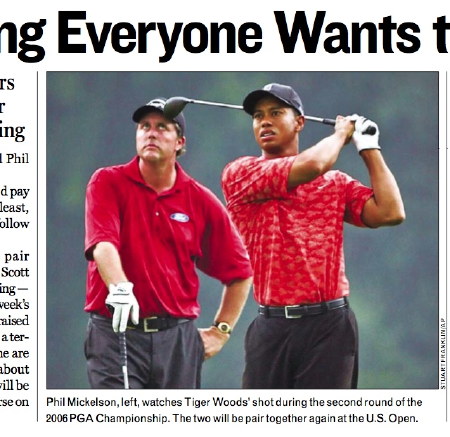 This image of golfers Phil Mickelson (left) and Tiger Woods (right) was taken by Stuart Franklin for Getty Images during the 2006 PGA Championship at Medinah Country Club. However, it was only when it ran in the Washington Post Express two years later (appearing in the June 12, 2008 issue) that it attracted attention. Readers noticed that Mickelson appeared to be simultaneously in front of and behind Woods. Critics suggested this effect was caused by careless digital alteration.

The photo editor of the Washington Post Express insisted he had merely acquired the photo from Getty Images and had not altered it in any way. Getty did not comment. It is possible the strange effect was created by the use of a telephoto lens. Therefore, this photo is listed as undetermined.
Links and References
• (Probably not) doctored photo [from Getty runs] in Washington Post. Boing Boing.
•2006 PGA Championship - Round Two. Getty Images.
• Washington Post - Unlikely. Photoshop Disasters.
Photo Categories: Celebrities, Photojournalism, Sports, Undetermined Status, 2005-Present
Tweet