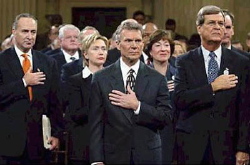 Politicians doing simple things wrong is a popular theme in political photo hoaxes. In this image, Tom Daschle (a U.S. Senator from South Dakota) appears to be reciting the Pledge of Allegiance while holding the wrong hand over his heart. Captions that accompanied this image read, "Daschle the Patriot (Leftist)" and also:

Brooks Brothers Suit: $680
Political Career to become Senate Majority Leader: $15 million.
Using the wrong hand while repeating the Pledge of Allegiance:
PRICELESS
When this picture first started appearing online, in late 2002, Daschle was serving as Majority leader in the U.S. Senate. Thus he was a highly visible political figure and a natural target for political jokes and smear campaigns. This photo was evidently an attempt to smear him by questioning his intelligence and patriotism. A hoaxer appears to have digitally flipped Daschle's body around along the horizontal axis, reversing his right and left sides (a simple operation using image manipulation software).

Evidence of this horizontal flip: Daschle's jacket is buttoned on the wrong side for a man's jacket. Also, if that is actually his left hand (and not his right hand flipped around) where is his wedding ring?
Photo Categories: Rotating or Moving Details, Politics, Stupid Behavior, viral images, 2000-2004
Tweet