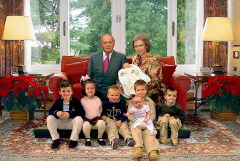 The official Christmas holiday photograph of the Spanish royal family, published on its website, showed King Juan Carlos and his wife Queen Sofia sitting on a red sofa surrounded by their seven grandchildren. A spokesman for the royal family later admitted the photo was fake. It had not been possible to gather the grandchildren together for a photo shoot. Therefore, the family members were digitally assembled in a composite photo. "It is not a photograph of an official event - it is merely a compilation used as a Christmas greeting," a royal household spokesman said. Critics noted that in the photo the King appeared to have no legs.
Links and References
"Spain's royal family uses digitally manipulated photo for Christmas card." (Dec 23, 2005). Associated Press.
Photo Categories: Composite Images, Children, Politics, Striking a Pose, 2005-Present
Tweet