Hand with no thumb 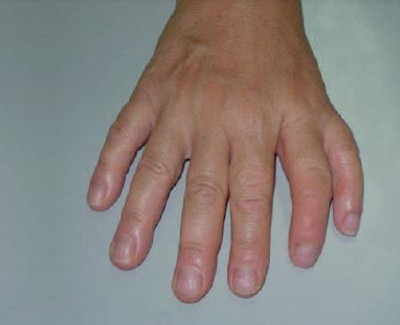 A caption frequently accompanies this image claiming it's "not photoshopped or edited" and that it accurately shows a person whose hand has "no THUMB at all!" However, the picture appears to have been edited. The person's thumb has been digitally erased and replaced by the two fingers on the right. This is revealed by the awkward joint between the second and third fingers (from the right).

The medical term for having extra fingers is Polydactyly. It is a real condition. However, polydactyls usually have the extra digit next to their little finger. It is very rare for a polydactyl to not have a thumb.
Photo Categories: Composite Images, Strange Body Parts, 2005-Present
Tweet