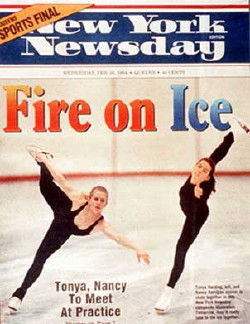 Associates of figure-skater Tonya Harding clubbed rival Nancy Kerrigan in the knee as she left the ice during practice at the 1994 U.S. championships in Detroit. Kerrigan recovered in time to compete at the Olympic games in Lillehammer a few weeks later, at which Harding was also scheduled to compete. So the media eagerly speculated about what would happen when the two rivals met at practice for the first time since the incident.

On the day before the two skaters were scheduled to meet, Newsday published a photo on its cover showing what the next day's practice might look like. A caption in the lower-right corner identified the photo as a "composite illustration." Nevertheless, Newsday was widely criticized for blurring the line between fact and fiction.
Photo Categories: Composite Images, Magazine Covers, Photojournalism, Sports, 1980-1999
Tweet