Dr. Schweitzer in the Congo 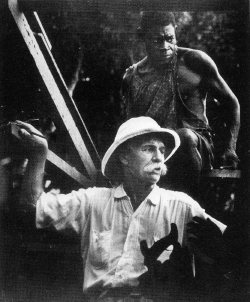 W. Eugene Smith took this photo of Dr. Albert Schweitzer helping to build a hospital in the Congo. It served as the lead photograph in a photo essay about Schweitzer, titled A Man of Mercy, commissioned by Life magazine.

More than thirty years after its publication, researcher Glenn Willumson, who was writing Smith's biography, discovered something new about the photo. As he was sorting through Smith's negatives, he realized that the famous photo was actually two photos composited together. Schweitzer and the man behind him are from one negative. The hand and the saw in the foreground come from a second negative. Smith apparently inserted the hand and saw into the image to conceal an area of fogging on the main negative.

Smith's editors at Life never knew it was a composite image, because Smith had prepared the image in his own photo lab. This was a privilege he was allowed because of his status within the photographic community, and because he had complained about the poor quality of Life's photo labs. The alteration violated Life's editorial policy, but there has been little public criticism of Smith for having made the change.
Links and References
• Willumson, Glenn. (1992). W. Eugene Smith and the Photographic Essay. Cambridge University Press: 211-13.
Photo Categories: Composite Images, Photojournalism, 1940-1959
Tweet