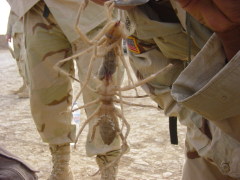 Near the start of the second war in Iraq, a picture began circulating online showing two enormous spiders locked together and dangling from a soldier's uniform -- one of the non-human dangers that soldiers faced in the deserts of the Middle East. An accompanying caption read:


Camel Spider found in Iraq--This is a huge spider!!!! This picture is a perfect example of why you don't want to go to the desert. These are 2 of the biggest I've ever seen. With a vertical leap that would make a pro basketball player weep with envy (they have to be able to jump up on to a camels stomach after all), they latch on and inject you with a local anesthesia so you can't feel it feeding on you. They eat flesh, not just suck out your juices like a normal spider. I'm gonna be having nightmares after seeing this photo!
Camel spiders are real. They do live in Iraq. They are big and nasty looking. However, the caption was, for the most part, a collection of false rumors. Camel spiders (also known as Solifugae or Wind Scorpions) do not latch onto camels and feed on their flesh, nor do they feed on humans. They cannot inject anesthesia so that you do not feel it as they feed on you. In reality, camel spiders are non-venomous. They feed primarily on crickets, pillbugs, and other desert creatures their own size or smaller. They avoid humans, but they will bite if they feel threatened, and their bite can hurt. However, it is not fatal.

Although the picture was not digitally manipulated, the proximity of the camel spiders to the camera did exaggerate their size. The largest camels spiders are approximately six-inches long, with their legs outstretched -- plenty large enough to look terrifying.
Links and References
• Camel Spiders: Behind an E-Mail Sensation From Iraq. National Geographic News.
• Solifugae, Wikipedia.
Photo Categories: Forced Perspective, False Captions, Very Large Animals, 2000-2004
Tweet