The 12th Annual Mid-Mississippi Art Competition, hosted by the Davenport Art Museum (now known as the Figge Art Museum), was open to any adult artist living within a 100-mile radius of the Quad-Cities. The museum received 786 entries, which were judged in various categories by an independent panel of jurors brought in from outside the region.

But at the award ceremony, held in October 1974, there were gasps and cries of surprise when artist Alexis Boyar walked up to the stage to receive the blue ribbon and $50 cash prize he had won for his entry in the weaving category.

The shock wasn't caused by the art. Alexis's piece, titled "Anitra's Dance," was described as a "small fiber wall hanging in off-white, with a range of interesting textures and a central phallic shape." Rather, the shock was caused by the artist himself, since he didn't seem to fit the entrance criteria. Specifically, he wasn't human. He was, in fact, a 6-year-old Afghan hound dog.


Left: "Anitra's Dance" by Alexis Boyar. Right: Alexis Boyar with his owner, Julie McDonald.
Alexis was led up to the stage by his owners, Elliott and Julie McDonald. Elliott was a Davenport lawyer, and his wife Julie was a writer and former chairman of the Iowa Arts Council. (See books by Julie McDonald on abebooks.com.) 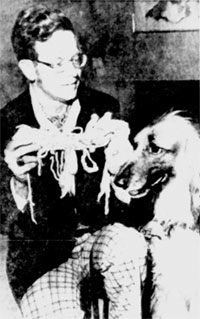 Elliott McDonald and Alexis
After accepting the award for Alexis, Julie McDonald explained that the piece of weaving had originally been an old mitten Alexis found during a walk in the park the previous winter. She noted, "He chewed it into a rather interesting shape. We thought it was interesting enough to enter in competition, but we were surprised when it won a prize.""

Elliott McDonald added, "This certainly affirms my faith in the integrity of the jurors. They didn't know the artist, where he went to school, where he had exhibited, or who his friends were. It proves that art is where you find it."

The award of the prize to Alexis caused some controversy. Two area artists told the McDonalds that entering a chewed mitten into the competition was "the all-time low in good taste." The McDonalds responded that they were "sorry anyone has been made unhappy by a dog's artistic accomplishment."

The McDonalds returned the $50 award to the museum, explaining, "We've awarded Alexis something more to his liking. We've given him an entire sofa all his own. It's an old one and he can chew on it all he wants to. But I don't think we will enter any more of his chewings in any art competition. Alexis will be able to retire as a winner."

The canine art of Alexis Boyar recalled the work of the monkey artist Pierre Brassau, exhibited at a Swedish art show in 1964.


An Art Show for Dogs 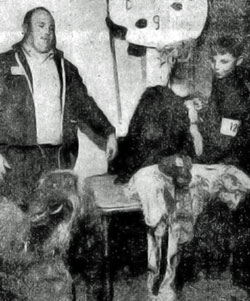 The entries were judged by Iowa state representative Robert F. Bina (who was also head of the Palmer Junior College art department).

Alexis served as an honorary judge, and his chewed mitten was displayed under glass during the show. However, Alexis didn't submit a work. Julie McDonald said, "now that he's won a blue ribbon against humans, he can't be bothered competing against dogs."

Predictably, there were many entries in the fiber category, as well as quote a few chewed plastic bottles.

The Best-of-Show award went to a black poodle named Kelly for a well-chewed quilt. A malamute named Adam won two awards, for a plastic planter with nibbled edges and a hoe handle with dental pointillism.

The Dog Club admitted it had been worried that a human artist might try to sneak a work into the competition, but that didn't happen. Or, at least, no human artist won a prize.
Links and References
Animals Art Satirical Art Hoaxes Hoaxes of the 1970s
Tweet

Well, the critters may not call their creations 'inspired' by the same definitions as humans, but I think I like their creations better than imagined deities and demigods on toast or stains. I mean, look at massive beaver dams, or the ornate stuff of bowerbirds. Surely these are more deserving of awards?