The Travels of Sir John Mandeville

The seventeenth-century writer Sir Thomas Browne declared that Sir John Mandeville was "the greatest liar of all time." The travel book attributed to Mandeville, which first appeared around 1371, was certainly one of the most popular books of the late Middle Ages (hundreds of medieval manuscript copies of it have survived to the present day), and it was definitely filled with bizarre fabrications. But Browne's assessment of Mandeville's character is undermined by the fact that Mandeville probably never existed.

The Travels of Sir John Mandeville described the travels of an English knight who left England around 1322 and journeyed throughout Egypt, Ethiopia, India, Persia, and Turkey. The stories that Mandeville returned with were fantastic, by any measure. He told of islands whose inhabitants had the bodies of humans but the heads of dogs, of a tribe whose only source of nourishment was the smell of apples, of a people the size of pygmies whose mouths were so small that they had to suck all their food through reeds, and of a race of one-eyed giants who ate only raw fish and raw meat. All of this fantasy was interwoven with other geographical descriptions that were perfectly accurate. 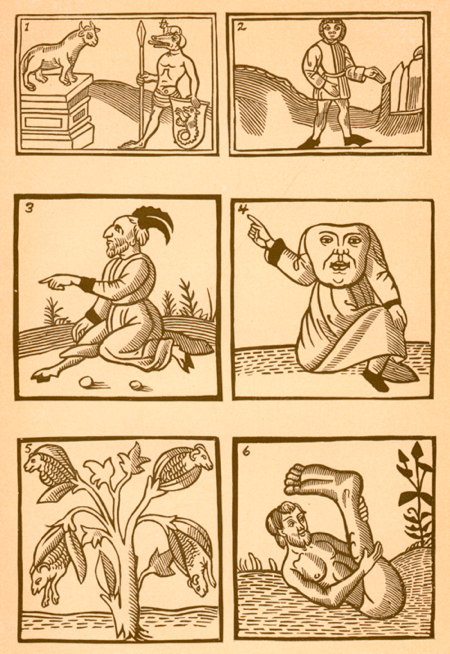 Illustration from the earliest printed edition of Mandeville's Travels showing some of the various races and species that Mandeville claimed to have encountered, including the wild men with horns and hoofs, the people with eyes in their shoulders, the folk that have but one foot, and the vegetable lamb.
The authorship of Mandeville's Travels remains unknown. Historians cannot decide whether the author was French or English, though they agree that the book was originally composed in French. The character of Mandeville, as already indicated, was almost certainly fictitious. The name might have been adapted from an earlier French romance titled Mandevie that also involved a hero who embarked on an imaginary journey.

It is not clear how seriously medieval readers took Mandeville's stories. It is tempting to think that they must have recognized them as works of fiction, but it can be a mistake to project too much modern skepticism onto the medieval world. Medieval culture made sense of the world by viewing it through the lens of religious imagery and fantastic legends. So in this respect the book did offer a truth, of a kind, though not one that modern readers are likely to grasp.
Links and References
Exploration and Travel Literary Hoaxes Hoaxes of the Middle Ages
Tweet