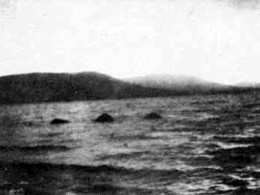 On July 14, 1951, Forestry Commission employee Lachlan Stuart took a picture of mysterious humps rising from the loch. Over twenty years later researchers visited the spot where he had taken the picture and realized the humps would have been in extremely shallow water close to the shore, meaning that Stuart's monster must have been awfully flat. Confirming their suspicions, author Richard Frere later revealed that Stuart had confessed to him the humps were nothing more than bales of hay covered with tarpaulins.
Loch Ness Monster Hoaxes
Tweet