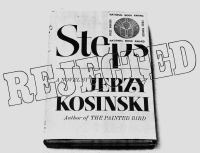 Artwork accompanying Ross's 1979 article describing the Steps Experiment.
In 1975 Chuck Ross was selling cable TV door-to-door, and dreaming of becoming a writer. However, he felt the odds were stacked against him since the publishing industry seemed incapable of recognizing talent. To prove his theory, he typed up twenty-one pages of a highly acclaimed book and sent it unsolicited to four publishers (Random House, Houghton Mifflin, Doubleday, and Harcourt Brace Jovanovich), claiming it was his own work. The work he chose for this experiment was Steps, by Jerzy Kosinski. It had won the National Book Award for Fiction in 1969 and by 1975 had sold over 400,000 copies. All four publishers rejected the work, including Random House, who was its original publisher.

When Ross described this experiment in Harper's Bookletter (now defunct), his methodology was criticized. George Plimpton argued that his cover letter sounded too casual. (It started off with "Hello.") Kosinski himself argued that Ross should have typed and sent the entire manuscript. He wrote, "It [Steps] depends very much on cumulative effect. I can see myself rejecting it... It would have been much more interesting if he had submitted the whole work... I've never submitted a fragment of my work to anyone."

To address this criticism, Ross repeated the experiment in 1979. This time he submitted the entire book to fourteen publishers (the original four plus The Atlantic Monthly Press; Farrar, Straus & Giroux; Harper & Row; Alfred A. Knopf; Seymour Lawrence; David McKay; Macmillan; William Morrow; Prentic-Hall; and Viking). He also used the pseudonym Erik Demos, in case someone recognized his name from the earlier experiment.


Several of us read your untitled novel here with admiration for writing and style. Jerzy Kosinski comes to mind as a point of comparison when reading the stark, chilly episodic incidents you have set down. The drawback to the manuscript, as it stands, is that it doesn't add up to a satisfactory whole. It has some very impressive moments, but gives the impression of sketchiness and incompleteness.
Ross commented that, "Evidently, Kosinski is not as good as Kosinski when Demos is the name on the envelope."

Next Ross sent queries to twenty-six literary agents. Again, no agent offered to represent him. Ross wrote that, "no one, neither publishers nor agents, recognized Kosinski's already published book. Even more disappointing was the fact that no one thought it deserved to see print."


Controversy
Some have criticized Ross's choice of Steps, suggesting that it is easy to understand how publishers could have rejected it. M.A.Orthofer has written,


Steps is a different beast from The Painted Bird. It won the National Book Award -- controversially, one might add, with many considering it a make-up prize for the previously overlooked The Painted Bird -- and it sold well. It may be of literary merit, it may have won a prestigious prize, many people may have bought it and a considerable number might even have read it, but it made no impression. It is not a bad book, but it is entirely unremarkable. A book the world has remained oblivious to. Fairly, rightly so. It has been reduced to a curious aside, an occasional footnote, a bibliographic entry. It is already among the most-forgotten books of recent years, and it will fade further. And Chuck Ross' clever success rests on this particular quality of the book -- rests entirely on it, one could argue.

The Painted Bird belongs in another category entirely. It was more widely discussed, and far better known. It made Kosinski's reputation, and it remains the most significant of his texts. A number of his works are still in print, but this is the big one. The magnum opus, the one that's cited when he is mentioned. Ross' ruse would never have worked had he submitted The Painted Bird, retyped, in his experiment. Fake or real, it is a unique text. It made its mark. It was widely read, well received. It is a familiar, known novel. It stands out, in whatever guise it exists. Arguably even those that have not read the original would recognize it were it submitted under a different title and a different author's name. Not necessarily as The Painted Bird, but as as an element of our common literary and humanistic experience, a fact which would be remarked upon and followed through until the connection with the original novel was made. In part this is due to the subject-matter, but The Painted Bird is also an accomplished and distinctive literary text (as none of Kosinski's other novels are -- though a number are quite interesting).
Perhaps Steps was an easy case. However, the same could not be said of Ross's next experiment, in which he submitted the script of Casablanca to 200 movie agents.

A final irony of the Steps experiment was that Kosinski was later accused of literary fraud. It was alleged that in writing his books he both relied on ghostwriters and extensively plagiarized from others.
Links and References
False Identity Literary Hoaxes Rejected Classics Hoaxes of the 1970s
Tweet

Nothing about this surprises me at all. I've often read books put out by the traditional publishers that in my opinion were poorly written. I've sometimes read these works and wondered if they'd ever even been seen by an editor due to the plethora of grammatical mistakes, misspellings, etc.

I also read a lot of stuff written by indie authors who finally decided to self-publish after finding themselves unable to win the approval of the publishing industry's arbitrary gatekeepers.

To be honest, about half of the self-published stuff I read is pretty bad. Often a good story idea, but that's about it. These books tend to be riddled with poor grammar, poor spelling, poor structure, etc. Fortunately, these books typically reveal themselves for what they are pretty darned quickly, so I don't waste too much time.

The other half however, in my opinion are a pleasure to read. Sure, I'll still find a few typos or grammar errors, or inconsistencies in the story, but really no more than the stuff I see in traditionally published works.

It's gotten to the point where just as a matter of principle, almost all of my book purchases lately are of those written by the indies. For the price of one book from a traditional publisher, I can pick up multiple books from indies. Even if 50% of them are pure crap, I'm still left with 50% of them that are potentially hidden gems.

I have no doubt that my opinion is strongly influenced by my personal experience. My wife has recently self-published a wonderful middle grade novel that has gotten great feedback from pretty much everyone who has read it and bothered to comment. For the most part, never could get the time of day from most agents or editors however. Well, her book is just great. Someday, hers will be a well-known name due to her writing. To all the agents and editors who blew their chance to work with her, I say "Too bad folks. Your loss. The ebook revolution has begun and you guys are on the wrong side of history. Ta ta."