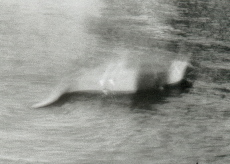 On November 12, 1933, Hugh Gray was walking back from church along the shore of Loch Ness when, so he later claimed, he saw an "object of considerable dimensions—making a big splash with spray on the surface" of the Loch. Luckily he had his camera with him, so he began snapping pictures. Only one of the pictures showed anything. Nessie believers hailed it as the first photographic evidence of the monster. Skeptics, however, dismissed it as a blurry mess that doesn't show anything at all. Many have suggested that it looks like a distorted image of a dog (perhaps Mr. Gray's own) carrying a stick in its mouth as it swims through water.
Loch Ness Monster Hoaxes
Tweet