The Society for Indecency to Naked Animals

G. Clifford Prout was a man with a mission, and that mission was to put clothes on all the millions of naked animals throughout the world. To realize his dream, Prout founded an organization, the Society for Indecency to Naked Animals (abbreviated as SINA). It was left unexplained why the society was 'for indecency' not 'against indecency'. 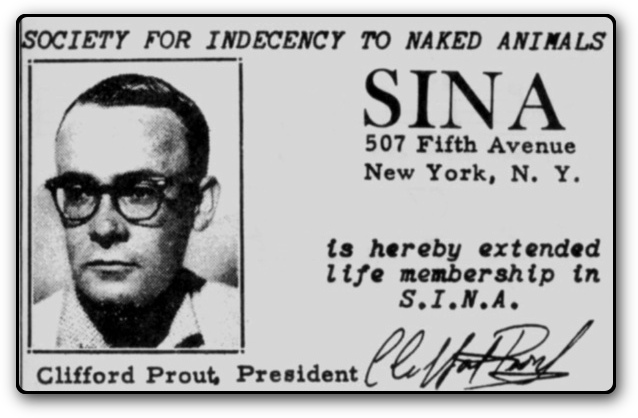 Prout first appeared before the American public to promote his organization on May 27, 1959 when he appeared on NBC's Today Show. His appearance generated a huge viewer response and soon thousands of letters were pouring in to SINA's headquarters. (Prout had provided a New York mailing address while on the air.)

More interviews followed after the success of this first appearance. Wherever he went Prout promoted his anti-animal-nudity philosophy and repeated his society's catchy slogans: "Decency today means morality tomorrow" and "A nude horse is a rude horse." Prout also urged SINA members (he claimed there were over 50,000 of them) to take an active role in their communities by handing 'SINA Summonses' to people who shamelessly walked their naked pets down the street. 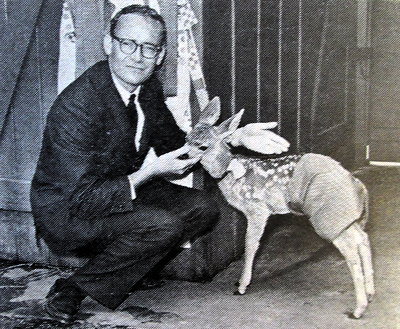 Prout displays a properly dressed fawn
Prout's campaign continued for a number of years until it reached a high point on August 21, 1962, when SINA was featured on the CBS News with Walter Cronkite. As the segment was airing, a few CBS employees recognized that Prout was actually Buck Henry, a comedian and CBS employee. SINA was subsequently revealed to be an elaborate hoax. Although Henry played the role of SINA's president, the hoax had been dreamed up and orchestrated by Alan Abel, who played the part of SINA's vice president.

Abel noted that people had been either outraged by the idea of SINA, or quite supportive of it. One woman in Santa Barbara reportedly tried to donate $40,000 to the cause. Abel politely turned down the money, insisting that the bylaws of SINA forbade him from taking any money from strangers. But surprisingly few called the bluff of Abel and Henry. Apparently almost everyone was willing to accept that such a society could be real.

Although the SINA hoax was officially exposed following the Walter Cronkite interview, Abel managed to keep the joke going for a few more years by means of a SINA newsletter mailed to the faithful. The newsletter included features such as press releases and sewing patterns for pet clothes. 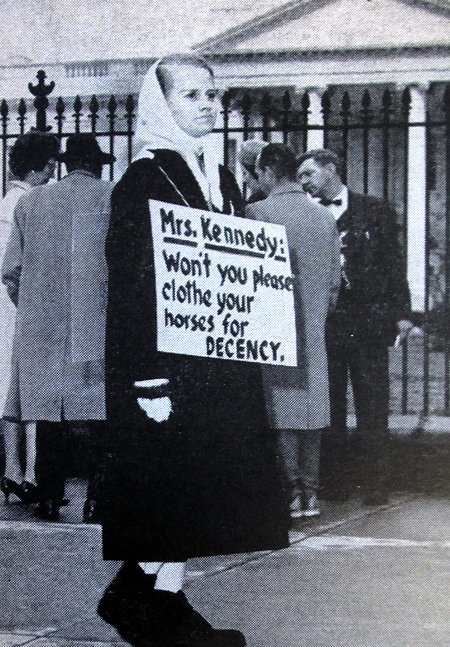 i was 8 years old when i saw these jokers on tv. well done.
Posted by ogn  on  Sat Jun 06, 2015  at  11:38 AM
This reminds me of a man that had dog named Naked and everyday he walked Naked into town.
Posted by Douglas G. P. McCarty  on  Tue Oct 25, 2016  at  07:55 AM
It's a good beginning. Next, we could extend the fight against indecency to naked plants: covering flowers' styles and stigmata (the female parts) with skirts and putting trousers on their filaments and stamina (male parts).
Posted by Polycarpe Brisset  on  Fri Jan 06, 2017  at  06:25 AM
I remember seeing that on Johnnie Carson. And thinking that was pretty far out. I would swear I saw a news article (filler)after I got out of the service in 1962.
Posted by gayle  on  Thu Jun 15, 2017  at  06:15 PM
On August 21, 1962 Walter Cronkite interviewed G. Clifford Prout (Buck Henry) on his CBS-TV Network news program. Mr. Prout ended the 7 minute interview by singing the SINA Marching Song while playing his ukelele. Cronkite just sat there with a stoic expression. His show ended with no explanation. It was an histerical sight to behold. Buck and I were laughing our sides off watching the telecast viewed by millions. When Cronkite learned of the hoax, he was furious and kicked the furniture in his office. Subsequently, he arranged to have that 7 minutes erased from the master tape stored in the New Jersey CBS warehouse. If anyone made a copy of that news show, please email me ASAP. Because I'll be 93 in three weeks.
Telephone: (212) 714-8298
Posted by Alan Abel  on  Fri Jul 07, 2017  at  06:53 PM