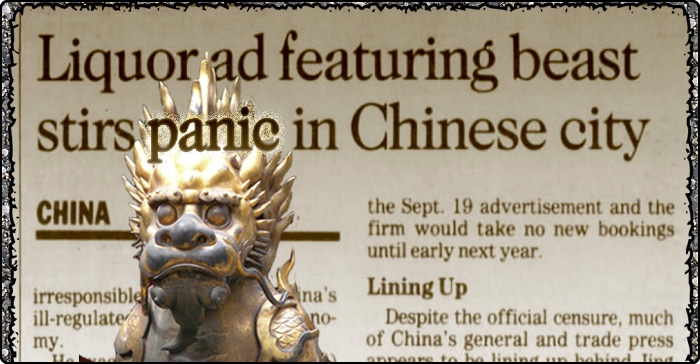 On the evening of September 19, 1994 a stark warning was repeatedly broadcast to TV viewers in Taiyuan, a city in northern China. A message scrolled across an otherwise blank screen warning that the Sibuxiang beast, a mythical creature whose bite was said to be fatal, was not only real, but on the loose and heading towards the city. "It is said that the Sibuxiang is penetrating our area from Yanmenguan Pass and within days will enter thousands of homes," the message read. "Everyone close your windows and doors and be on alert."

The residents of Taiyuan panicked. Many of them barricaded themselves inside their homes, fearing to go out. Others called the local authorities to find out what was happening.

As it turned out, the Sibuxiang beast was real, but it was not an animal. It was a new brand of liquor. The TV message had been an advertisement. Panicked viewers had failed to realize this, even though the message had ended with the phrase, "Plotted by Jinxin advertising."

The source of the confusion stemmed from the fact that TV commercials were still something of a novelty in China. Most of them involved little more than a product shot and a voice-over. For this reason, the Sibuxiang commercial was ground-breaking, to the extent that viewers didn't even recognize it as an ad. Foreign commentators heralded it as evidence of the growing presence of capitalist innovation in China.

Chinese authorities fined Jing Huiwen, the creator of the ad, 5000 yuan (about $590) for causing a public panic, but Jing noted that paying the fine was a bargain considering the amount of publicity the ad generated. The commercial and ensuing panic were discussed on all the news show throughout China, causing Sibuxiang liquor to become a well-known brand overnight. Three months after the ad aired, Jing reported that his client base had quadrupled.
Links and References
Advertising Hoaxes Mass Panic Television Hoaxes Hoaxes of the 1990s
Tweet