Georgia residents Jennifer Wilbanks and John Mason were to be married on April 30, 2005. But four days before the wedding Jennifer disappeared, sparking a nationwide search for her. She reappeared three days later in Albuquerque, New Mexico claiming she had been kidnapped. According to the statement she gave police, she said that while jogging on April 26 she had been grabbed by two individuals, a "hispanic male with short black hair and rotten teeth" and a "heavy set white female with blonde, frosted shoulder length hair." They had thrown her into the back of a van, sexually assaulted her, and then driven her to Albuquerque, where they let her go.

During questioning, the police told Wilbanks they were skeptical of her story, and eventually she confessed it was false. In reality, she admitted, she had fled her home, taking a greyhound bus first to Austin, Texas and then to Albuquerque. She had done so "because of the pressures of the wedding" and because "the list of things she needed to get done and no time to do it made her feel overwhelmed."

The case of the "runaway bride," as it soon came to be known, was extensively covered by the media. Many criticized the coverage as frivolous and excessive.

Popular interest in the case inspired many forms of tongue-in-cheek Runaway Bride memorabilia, including "runaway bride on toast" sold on eBay (another entrepreneur offered Georgia peach preserves to accompany it), a Runaway Bride action figure, and "Jennifer's High Tailin' Hot Sauce" sold by Pappy's Peppers of Lawrenceville, Ga. The American Dialect Society voted the term "flee-ancée" one of the most creative words of the year for 2005. The Runaway Bride on Toast auction closed with a winning bid of $15,400. 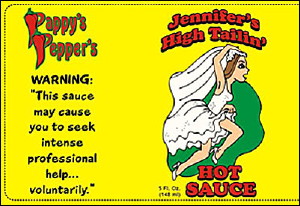 Mason and Wilbanks subsequently ended their engagement. Wilbanks was charged with a felony indictment of giving false information to police. Through a plea bargain, she was sentenced to two years probation and 120 hours of community service.
Links and References
Crime Abduction Romance Hoaxes of the 21st Century
Tweet