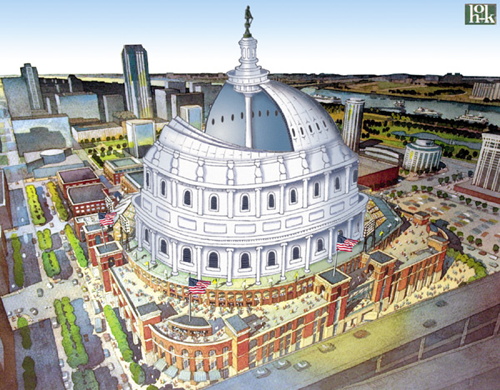 On 3 June 2002, the Beijing Evening News appeared to have scooped its competitors when it ran a story alleging that the U.S. Congress was threatening to leave Washington DC if the city didn't construct a new Capitol building that included a retractable dome. The article said that Congress was even considering a move to a town such as Memphis or Charlotte if the DC city government didn't buckle under to its demands.

House Speaker J. Dennis Hastert (R-Ill.) was quoted as saying, "Don't get us wrong. We actually love the dilapidated [old] building. But the cruel reality is, it's no longer suitable for use by a world-class legislature. Its contours are ugly, there's no room to maneuver, there aren't enough bathrooms, and let's not even talk about the parking."


Skepticism
The article struck Henry Chu, a Beijing-based reporter for the Los Angeles Times, as rather odd. Why would American papers not be covering such a dramatic political development? But when Chu did some fact checking, he discovered that American papers actually were covering the story. In fact, an American publication had been the source for it. However, that publication was The Onion, a humor magazine whose stories are clearly recognizable (at least to American readers) as satire.

Chu surmised that a reporter for the Beijing Evening News had simply translated the Onion's story almost word for word, not realizing that the article was a satirical take on the relationship between sports teams and their host cities. The Evening News had then printed the tale as fact without indicating its source.


Defensive Reaction
Chu questioned the Evening News about the story, but the paper's international editor reacted defensively to his suggestion that its reporting was inaccurate. "How can you prove it's not correct?" The editor demanded. "Is it incorrect just because you say it is?"

The editor of the Onion, by contrast, happily admitted the story didn't contain a word of truth. He commented, "Wow, even journalists now believe everything they read."
Links and References
Architecture Media Hoaxes Satire Mistaken as News Hoaxes of the 21st Century
Tweet