The Predictions of Isaac Bickerstaff 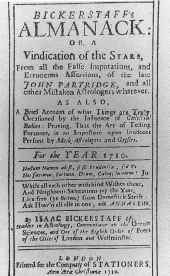 The Almanac of Isaac Bickerstaff.
In February, 1708 an almanac went on sale in London titled Predictions for the Year 1708 by Isaac Bickerstaff. This almanac lay the groundwork for an elaborate April Fool's Day prank that was perpetrated upon one of England's leading astrologers.

Almanacs were the most popular form of literature at that time, and they usually contained astrological predictions about the coming year. One of the events predicted by Mr. Bickerstaff was the death "by a raging fever" of the famous astrologer John Partridge. Bickerstaff predicted that Partridge would die at exactly 11 p.m. on March 29 of that year.

Londoners were shocked and amused by this bold claim. But almost immediately Partridge issued a reply, claiming that Bickerstaff was nothing but a fraud. "His whole Design was nothing but Deceit,/ The End of March will plainly show the Cheat," Partridge declared.

Now the gauntlet had been thrown down. All of London held its breath waiting to see who would be proven right, Partridge or Bickerstaff. In other words, would Partridge die on March 29, or survive?

On the night of March 29 Bickerstaff issued an elegantly printed, black-framed Elegy announcing that Partridge had died. Bickerstaff said that he had gone to see Partridge as he lay dying in his bed, and that with his last words the ailing astrologer had admitted to being a fraud. Partridge had only written his predictions, Bickerstaff explained, in order to earn enough money to support his wife.

On March 30th or 31st an anonymously penned pamphlet was also circulated around London titled The Accomplishment of the First of Mr. Bickerstaff's Predictions. It declared that Bickerstaff's prediction had come true, but noted that its timing had been off by four hours, since Partridge had died at 7:05 p.m., not 11 p.m. Given the slow speed at which news travelled, the word of Partridge's death only became generally known throughout London on April 1st, April Fool's Day.

But Partridge was actually still alive. On April 1 he was woken by the sexton outside his window who wanted to know if there were any orders for his funeral sermon. Then, as he walked down the street, people he knew stared after him or stopped him to inform him that he looked exactly like a deceased acquaintance.

Enraged, Partridge published a pamphlet in which he insisted that he was still alive and that Bickerstaff was a fraud. Bickerstaff coolly responded by arguing that Partridge was obviously dead, since no living man could have written the rubbish that had appeared in his last almanac. Bickerstaff also noted that Partridge's own wife had admitted that her husband had "neither life nor soul."

It turned out that Isaac Bickerstaff was actually a pseudonym for Jonathan Swift, author of Gulliver's Travels. Swift's intention had been to embarrass and discredit Partridge, apparently because he was annoyed by the astrologer's attacks upon the church. Swift declared that Partridge would die "by a raging fever" since Partridge himself had predicted that a fever epidemic would sweep through London in early April, 1708. Swift's hoax succeeded in discrediting Partridge as an astrologer and eventually forced him to stop publishing his almanac.
Links and References
April Fool’s Day Death Astrology Jonathan Swift
Tweet

How stupid can people be? When they see tyhe man walk down the street on April 1, they can't imagine it being a prank someone did on him? I would have believed him, anyway. Poor man, lost his job and everything!
Posted by Anna  on  Thu Apr 01, 2004  at  12:01 PM
Well everyone who was exposed the prank already believed in astrology, so I would expect a higher ratio of dumb people to believe this prank then a general sample of the population.
Posted by Morgan  on  Fri Apr 08, 2005  at  11:27 PM
Maybe in the 1700's April Fools jokes weren't as commonplace as they are today?

Anyway, who cares if he lost his job? After all, he was an astrologer, swindling common people for their money.

Posted by vuzlyn  on  Sat Apr 09, 2005  at  11:33 PM
Oh honestly people!
One, look at when this happened (1708) And look at who did it (Swift)! Swift is amazing for pulling this off, he tok his satire beyond book level and actually made someone lose his job! that's fantastic!

now then, go be smart little sheep and read A Modest Proposal and Gulliver's Travels.
Posted by Llewllynn  on  Sat Feb 11, 2006  at  10:16 PM
This is very funny, Swift is a master. My English teacher had us read A Modest Proposal the other day, and failed to mention that it was real, not satire. A couple of people, realizing that it was March 31st, didn't fall for it, but there were some who started freaking out, "OMG, they ate babies?!?!"
Posted by Jo  on  Sun Apr 02, 2006  at  04:43 AM
I like the way Jonathan Swift makes satire. He's so practically a genius in the field.

People believed that Partridge's death actually occured for one main reason: not because they are dumb, but because they are gullible. Dumbness and gullibility are two different things.
Posted by Gilbert  on  Tue Apr 22, 2008  at  02:05 AM