Woodward's reconstruction of the Piltdown man skull
During the early twentieth century the scientific community was eagerly searching for the fossil 'missing link' that would prove an evolutionary relationship between man and apes. In 1907 a jawbone was found in Germany that displayed characteristics of both species. This was the best evidence for a missing link yet, but scientists still wanted something better, something more definitive.

Enter Charles Dawson and the Piltdown Man. Charles Dawson was a solicitor who lived in southern England, near Sussex. He was also an enthusiastic amateur paleontologist. In 1908 some workmen, knowing his interest in fossils, presented him with curious bone fragments that they had found while working in a gravel pit near the town of Piltdown. Dawson's interest was piqued and he soon began conducting his own excavation in the pit. Eventually he enlisted the aid of Arthur Smith Woodward, keeper of the Department of Geology at the British Museum.


Presented to the scientific community

Charles Dawson (right) at the Piltdown site
In December, 1912 Woodward displayed a reconstruction of the skull at a meeting of the Geological Society of London. Woodward argued that it was the skull of a man, whom he called Piltdown man (after the location where it had been found). He argued that it came from a human who had probably lived about half a million years ago, during the Lower Pleistocene period.

Woodward's claim immediately caused an enormous stir within the scientific community. Many felt that the jawbone and skull were simply too dissimilar to belong together. The jaw, they said, looked far more apish than one would expect to find attached to a high-vaulted, human skull. But Woodward's backers eventually won out and the new species entered the textbooks as Eoanthropus dawson, or "Dawson's Dawn Man."

Over the next few years more fossil objects continued to turn up in the Piltdown pit: animal bones, an object that looked like a cricket bat, and two more skulls. Then, in 1916, Dawson died, leaving Woodward as the main advocate for the Piltdown man.


Proven to be a fake 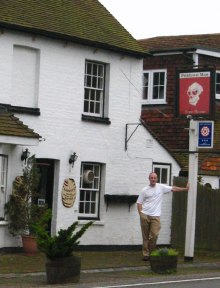 The Piltdown Man Pub in Piltdown, England
For over three decades the Piltdown skull was accepted by the scientific community as an authentic artifact. But as more skeletons of early man were found, it became clear that the Piltdown Man was radically unlike anything else in the fossil record. Therefore in 1953 a team of researchers at the British Museum (Kenneth Oakley, Wilfred Le Gros Clark, and Joseph Weiner) subjected the skull and jawbone to a rigorous series of tests. What they found was shocking. The skull was a fake.

Using a fluorine-based test to date the skull, the researchers determined that the upper skull was approximately 50,000 years old. The jawbone, however, was only a few decades old. A second test, using nitrogen analysis, confirmed the first test. They also found that the jaw had been artificially stained with potassium dichromate to make it appear older. The British Museum researchers argued that someone must have taken the jawbone and teeth of a modern ape, probably an orangutan, and stained them in order to make them look ancient. These artifacts, the jaw and skull fragments, must then have been planted at the Piltdown site.

Having proven fraud, the question that remained was who had been responsible for the deception. Woodward had a strong reputation for honesty, and his innocence was generally acknowledged. Dawson, instead, was fingered as the likely culprit. His motive for perpetrating the hoax was complex, since he never profited from it financially. But it seemed likely that he had done it to gain scientific fame and recognition. After the British Museum team published their findings, it was then discovered that Dawson had trafficked in other fake antiquities. This seemed to confirm that he probably was the culprit behind the Piltdown man hoax.

Today most still agree with the verdict that Dawson was the hoaxer, but controversy continues to simmer. Some argue that Dawson worked with an accomplice, perhaps Pierre Teilhard de Chardin, a young priest who briefly participated in the dig. Others place the blame elsewhere entirely. Martin Hinton, an employee at the British Museum whom Woodward once refused a job, has been implicated ever since a boxful of artificially stained bones that may have belonged to him was discovered in 1975. Even Arthur Conan Doyle, author of the Sherlock Holmes novels, has been named as a possible suspect. Doyle lived near Piltdown and had a strong interest in paleontology.

Whoever perpetrated the crime, it is considered to be one of the most damaging scientific hoaxes of all time, because it set the development of evolutionary theory back for years while researchers labored pointlessly to integrate a fake skull into the fossil record.

"Whoever perpetrated the crime, it is considered to be one of the most damaging scientific hoaxes of all time, because it set the development of evolutionary theory back for years while researchers labored pointlessly to integrate a fake skull into the fossil record."

It was not a crime, it was a grand hoax. Science is not a religion where those who interfere with it are heretics to be burned at the stake. We should laugh when such people succeed because otherwise science will turn into a religion, as it is to too many people already.