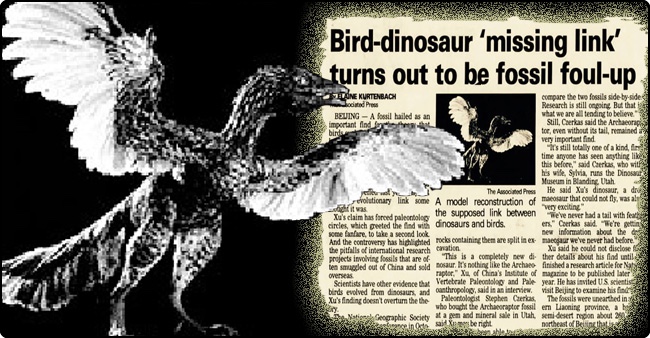 The National Geographic Society held a press conference on October 15, 1999 to announce a major discovery: It had found a 125-million-year-old fossil in northeastern China that appeared to be the long-sought missing link between dinosaurs and birds. For over twenty years paleontologists had debated whether birds were descended from dinosaurs. This fossil seemed to provide conclusive proof they were.

In addition to the press conference, held at the National Geographic's corporate headquarters, the Society simultaneously published a glossy article about the find in its well-known magazine.

The fossil bird, when living, would have been about the size of a large chicken, or a turkey. But it would have been a turkey that bore the long tail of a dinosaur. It was this mixture of dinosaur and bird parts that made researchers believe they had found the dinosaur-bird missing link. As Christopher Sloan, author of the National Geographic article, enthusiastically wrote, "Its long arms and small body scream 'Bird!' Its long, stiff tail... screams 'Dinosaur!'"

What Sloan didn't realize at the time, was that the body and tail together should have screamed 'Fake!'

Xu Xing, a Chinese scientist who had initially helped to identify the fossil, eventually realized it was a fraud when he found a second fossil containing an exact, mirror-image duplicate of the Archaeoraptor's tail, but attached to a different body. Fossil stones, when taken from the ground, often cleave in two, producing two mirror-image sets of fossil slabs. Evidently someone had taken one of the slabs bearing the tail fossil and affixed it to a fossil of a bird, thereby producing a hybrid dinosaur-bird creature.

National Geographic published an admission of its mistake in March 2000 and a fuller analysis of how it had been duped in October of that year. It admitted red flags had been raised about the discovery at various points, but that it had failed to see them. More seriously, it acknowledged rushing its find into publication before more scholarly journals had the chance to peer-review the data.

U.S. News & World Report was the first to refer to the Archaeoraptor Liaoningensis forgery as the case of the Piltdown Chicken, alluding to the infamous Piltdown Man hoax of 1912.
Links and References
Science Paleontology Scientific Fraud Hoaxes of the 1990s
Tweet

Good article. It proves that we must all seek facts and not accept information as a fact only because it seems to verify our opinions.
Posted by Jerold Roth  on  Thu Jun 23, 2005  at  03:55 PM
Oh my gosh I had no idea this was a fake! I remember reading this article when it came out; I'm not sure how I could have missed the post-post apology!
Posted by Becca  on  Sun Sep 09, 2007  at  01:58 AM
well, there was a positive ending to this hoax. the "composite fossil" turned out to be pices of a dinosaur-like bird and a birdlike dinosaur, which have been followed by numerous finds of genuine feathered dinosaurs and toothey, clwed birds in the liaoaning province.
Posted by Henry  on  Mon Mar 10, 2008  at  08:08 PM