In 1924, a seventeen-year-old farmer, Emile Fradin, discovered an underground chamber that contained many mysterious artifacts. He did so while plowing a field on his grandfather's property in Glozel (near Vichy, in central France).

Word of this discovery reached Antonin Morlet, a Vichy surgeon and amateur archaeologist. Together, Morlet and Fradin soon unearthed thousands of artifacts at the site, including human bones, glass-covered bricks, tools, sculptures of hermaphroditic sexual organs, pebbles, and vases. Most mysterious of all were a series of ceramic tablets that bore strange inscriptions on them written in an unknown language. 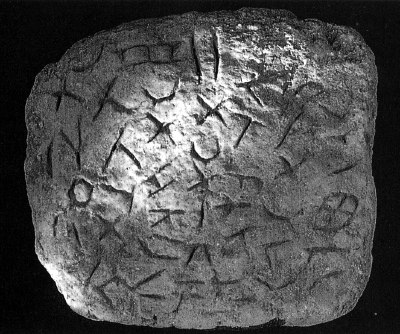 A tablet bearing the Glozellian script
Morlet declared the site to be the most ancient in the world, but other archaeologists were suspicious. The bizarre nature of the Glozel finds, as well as their diversity (seeming to mix many styles), made them skeptical. In 1927, a commission appointed by the International Institute of Anthropology declared most of the Glozel artifacts to be fakes.

But the controversy didn't end. A later commission, organized in 1928 by Salomon Reinach, concluded that the finds were genuine. A series of arguments (both legal and scholarly) about the authenticity of the finds ensued.

During the 1970s various tests, including thermoluminescent analysis and radiocarbon dating, were used to date the Glozel finds. These tests yielded an age range from 700 ad to ad 100. However, doubts still persisted, primarily because the Glozel finds were so unlike anything else from that region and time period.

In 1983, a new excavation began at Glozel, about 500 meters from the original site. This produced few artifacts, but a few stones bearing the mysterious Glozellian script were found. Supporters argued that this confirmed the authenticity of the site as a whole. However, the official report of the excavation concluded that the site was medieval, and that it had probably been enriched by forgeries.

The inscriptions still resist translation. Many scholars have noted a resemblance to the Phoenician alphabet. In 1982, Hans-Rudolf Hitz suggested they were of Celtic origin.
Links and References
Hoaxes of the 1920s Archaeology
Tweet

The origin of the name of the locality Glozel

In dialect, in some regions of France including the Bourbonnais, in the initial C is often pronounced [g], and conversely the G in the final position is pronounced [c / k], example plum: "Reine-Claude" is called "Reine-Glaude."
Thus, for the original meaning of the term Glozel, one can find the root in the following words, taken from the local dialect and / or regional speech:
- Clos: "cultivated paddocks" (in langue d'oil, Celtic Klos: "close", & Gallic Clos: "closed / piece of land").
- Claussel: frequentative derivative Claus, the ending "-el" is a diminutive, is the equivalent of Closerie: "farm" (in the South and Central France).
- Cluzel: "corrals / cave (which is a closed)."

The Champ (field) Duranthon, of Durantons and / or Duranton, literally "ford of the forest" in Celtic, takes its name cultic of the words Dur: "oak / forest", Ath: "ford", & Ona: "on". The Celtic Goddess Dana was cross the ford to the dead on his horse. Or literally "brave and strong", by translation through the Celtic Dur: "brave", teangorlach Dùr: "drive," Ona "on", & Tun: "fort", to Dunon: "fortress" lexeme French words Dune and Dunette.
That is to say that the "modern" French appellation: Champ des Morts: "fields of the dead" is not at all suited to Celtic religious concept to the naming Duranthon.

You know maybe not, but I tabled in the BNF (Bibliothèque Nationale de France in Paris) in May 1996, the book, I have since made CD "Manifesto of Scholiastique: Key of Glozel 'Western Esotericism ", where I translate the writing artifacts and plates Glozel. You can see examples on the blog: Glozel_enfin_traduit.eklablog.com (and this is something that the translations of Mr. Hitz ...), or: Blog Odhinn-Hermodr.

Posted by Odhinn-Hermodr de Warenghien  on  Fri Feb 03, 2012  at  03:19 PM
My classroom recently read the story of the Glozel Artifacts. It was very interesting but these 5th graders and 6th graders think its partly authentic and partly a hoax. They think the artifacts are from the "dark ages"...
Posted by Greenway Students (Minnesota, USA)  on  Tue Mar 03, 2015  at  01:51 PM