Shortly before Christmas, 1863, a 72-page pamphlet appeared for sale on newsstands in New York City. It cost a quarter and was titled Miscegenation: The Theory of the Blending of the Races, Applied to the American White Man and Negro. 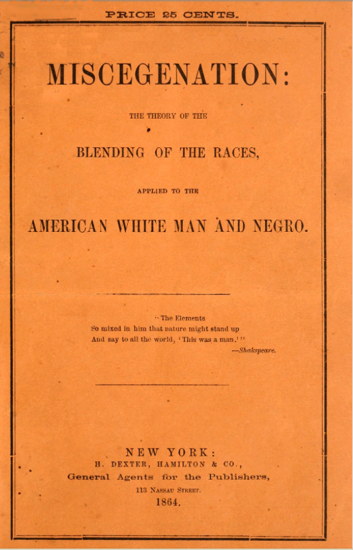 The pamphlet opened with an explanation of its title. 'Miscegenation' was a word that the author of the pamphlet had coined, and so he explained that he had invented it by combining two latin words: miscere (to mix) and genus (race). He intended the term to describe a blending, or mixing of different races, thus replacing the word 'amalgamation' which was used at that time to describe interracial unions, but which he felt did not sound scientific enough.

The pamphlet went on to expound a social philosophy which, by modern standards, sounds extremely enlightened, but which by the racist standards of 1863 was highly inflammatory. He wanted to promote the practice of miscegenation. In other words, he wanted to encourage white and black people to have children with each other. The author wrote:


The miscegenetic or mixed races are much superior, mentally, physically, and morally to those pure or unmixed," the author proclaimed. Furthermore, he argued, the strength of the American nation stemmed "not from its Anglo-Saxon progenitors, but from all the different nationalities ... All that is needed to make us the finest race on earth is to engraft upon our stock the negro element.
After delineating the benefits to be attained by uniting the races, the author turned his attention to the Civil War that was then raging, and he argued that miscegenation should be a central goal of the war effort:


It is idle to maintain that this present war is not a war for the negro ... It is a war, if you please, of amalgamation ... a war looking, as its final fruit, to the blending of the white and black... Let the war go on... until church, and state, and society recognize not only the propriety but the necessity of the fusion of the white and black—in short, until the great truth shall be declared in our public documents and announced in the messages of our Presidents, that it is desirable the white man should marry the black woman and the white woman the black man.
The pamphlet ended by suggesting that Lincoln should add a miscegenation plank to the Republican party platform (the presidential election was approaching in November 1864), and that he should proclaim that "the solution of the negro problem will not have been reached in this country until public opinion sanctions a union of the two races... that in the millennial future, the most perfect and highest type of manhood will not be white or black but brown, or colored, and that whoever helps to unite the various races of man, helps to make the human family the sooner realize its great destiny."


The Pamphlet Provokes Controversy
The author of this pamphlet had mailed out complimentary copies of this tract to prominent anti-slavery leaders, such as Lucretia Mott and the Grimke sisters, requesting their opinion about the work. Their replies came back by mid-January 1864, and they were all generally favorable, expressing admiration for the pamphlet's liberalism, but also urging the author demonstrate more caution. The Grimke sisters, for instance, wrote that they admired the pamphlet's principles, but they had grave doubts about the expediency of making miscegenation an issue in Republican politics.

Samuel Sullivan Cox,
Democratic Congressman
By February 1864 the pamphlet was being advertised for sale in abolitionist papers. But on February 17, a Democratic congressman named Samuel Sullivan Cox delivered a speech in Congress denouncing the pamphlet and claiming it represented the kind of social philosophy embraced by his Republican colleagues. Somehow Cox had been supplied with the favorable abolitionist reviews of the pamphlet, even though these had been mailed back directly to the anonymous author of the pamphlet, and he quoted from these liberally, heaping scorn upon these liberal thinkers.

Cox's speech was widely reprinted in the Democratic press, and it prompted a reply on March 16 from arch-Republican Horace Greeley, editor of the New York Tribune. In an editorial Greeley declared, somewhat ambiguously, that while he did not want to actually promote interracial marriage, he felt the issue was no one's business but the marrying couple's themselves.

The Democratic press took this statement and ran with it, wildly exaggerating what Greeley had said in their attempt to paint their Republican enemies as promoters of miscegenation. The Democratic New York World, for instance, declared that it wanted to "call attention to the fact that the leading Republican journal of the country is the unblushing advocate of 'miscegenation,' which it ranks with the highest questions of social and political philosophy."

Soon charges and countercharges were flying back and forth between the Republican and Democratic papers. One Democratic paper, the New Hampshire Patriot, wrote an article titled "Sixty-Four Miscegenation," in which it claimed (falsely) that 64 abolitionist school-mistresses in New England had given birth to mulatto babies. The Democratic papers spread this story far and wide.

Horace Greeley,
New York Tribune editor
By June the Miscegenation pamphlet had been reprinted in London, and it had prompted Dr. J.H. Van Evrie, a radical Democrat, to issue an anonymous pamphlet in response to it, titled "Subgenation: The Theory of the Normal Relation of the Races—An Answer to 'Miscegenation.'" Van Evrie's thesis was that the normal relation of the races was for black people to be subjugated to the will of white people.

Throughout the summer the Democratic press kept up its attempt to depict Republicans as promoters of miscegenation. By doing so, it hoped to appeal to the racism of white, working class communities, and thus convince them to vote against Lincoln in the upcoming election.

As the election neared the Democrats intensified their attack. They circulated pamphlets in the working-class districts of New York City with titles such as "Miscegenation and the Republican Party," and "The Miscegenation Record of the Republican Party." They also began to portray Lincoln as a supporter of miscegenation, claiming he desired the "amalgamation of the white working classes with negroes."


The Hoax Exposed
On November 1, a London paper that had Democratic sympathies, the Morning Herald, printed on its front page a letter it had received from an American correspondent. It gave the letter the headline:

"THE GREAT HOAX OF THE DAY! The Great Miscegenation Pamphlet Exposed—The 'Moon Hoax' in the Shade—Who Wrote the Book—How it came into Notice—Letters of Indorsement from Leading Progressives."

The letter revealed that the Miscegenation pamphlet had not been written by a Republican abolitionist. Instead it had been written by a couple of Democratic newspapermen who had penned the pamphlet, and then circulated it as a way to insert the inflammatory issue of miscegenation into the presidential election. The correspondent declared that the authors of the pamphlet would never be discovered, but looked forward to the moment when the exposé reached the States because, he predicted, the Republicans would look like fools for not having recognized the pamphlet's satirical intent.

It took three weeks for the London article to get back across the Atlantic to America, so that it was two weeks after the election when the Democratic New York World exposed the Miscegenation hoax on its front page. It declared that the Miscegenation pamphlet, which had been conceived as a satire, had been "received as a sermon" by the abolitionists.

However, the joke was on the Democrats, for despite their efforts to turn the working-class public against the Republicans, they lost the election. The Republicans, glowing from their decisive victory in the polls, ignored the exposure of the miscegenation hoax.


Identity of the Author
The correspondent to the London Morning Herald had predicted no one would ever know who had authored the Miscegenation pamphlet, but this turned out not to be true. Six years later George Wakeman, a reporter for the Democratic New York World, died, and in his obituary the World stated that "His humor on paper was conspicuous in the celebrated Miscegenation hoax, of which he was part author."

At the turn of the century the main author of the hoax was revealed. It turned out to be another New York World reporter named David Goodman Croly. Croly was a prominent newspaperman, editor, and futurologist. His wife, who revealed his part in the hoax, was a well-known feminist.

Apparently these two New York World reporters had not only sent complimentary copies of the Miscegenation pamphlet to abolitionist leaders, they had also sent a copy to President Lincoln with a note attached that read, "I hereby transmit a copy of my work on 'Miscegenation' in the hope that after you have perused it, you will graciously permit me to dedicate to you another work on a kindred subject... I am tempted to make this request from the various measures of your administration looking to the recognition of the great doctrine of human brotherhood, and from your speech to the New York workingmen, in which you recognize the social and political equality of the white and colored laborer."

Lincoln never responded to this letter. Thus the Democrats failed to get what they really had hoped for, a presidential endorsement of miscegenation.

The New York World, from which the Miscegenation pamphlet had sprung, was itself a fairly unsuccessful paper. It lost money steadily until 1883, when it was bought out by Joseph Pulitzer.

Meanwhile, the word 'miscegenation,' coined in the 1863 pamphlet, endured and is still in use today.
Links and References
Linguistic Outrage Hoaxes Political 19th-Century Hoaxes (1850-1900) Racial Hoaxes Hoaxes by Journalists
Tweet

Mixed race sex is at the core of hatred in America.The fear by white men of sex between balck males and white women has been the catalyst of much of the racial violence in our history. It is ironic that bigots would think so lowly of racial intimacy that they would deem it a "hoax".This shows how far apart the two sides of racial equality were. I would love to see the faces of the hoaxers in modern America where black guys and white girls regularly get together as if our awful history didn't exist. Hopefully they are rolling over in their graves!
Posted by Dale Marcelle  on  Sat Jan 26, 2013  at  12:12 PM
wow. This was extremely interesting. As a mixed woman, I wondered where the word came from and found this article. I wouldn't have guessed it had such an interesting story!
Posted by Simone  on  Thu Sep 03, 2015  at  01:25 PM