On September 13, 1938 Boston Curtis won the post of Republican precinct committeeman for Milton, Washington, by virtue of fifty-one votes cast for him in the state primary election. Boston Curtis ran no election campaign, nor did he offer a platform. However, he also ran uncontested, so his election should not have been a surprise. But when the residents of Milton realized who Boston Curtis was, they were surprised, because Boston was a long-eared docile brown mule. 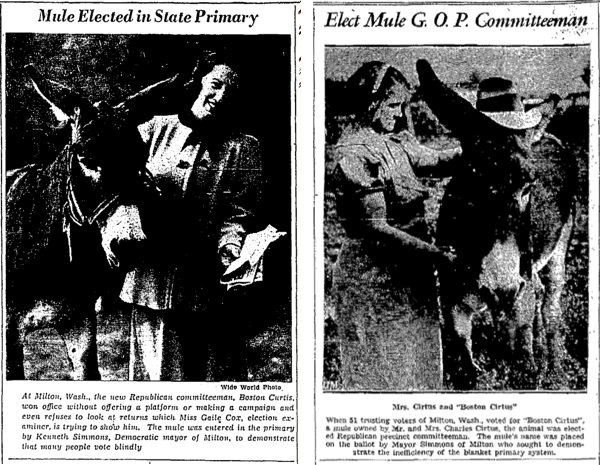 Boston Curtis's election victory was engineered by Milton's Democratic mayor, Kenneth Simmons. Simmons had taken the mule down to the courthouse and placed its hoofprint on all the documents necessary to register it to run. The hoofprint appeared on the records as a smeared mark. Simmons also signed his own name to the documents as a witness.

Simmons came up with the name "Boston Curtis" by combining the mule's name of "Boston" with the name of its owner, Mrs. Charles Curtis.

Simmons gave two reasons for the stunt. First, he wanted to embarrass the Republican party. (The joke was that the Republicans had voted in a cousin of the Democratic party's donkey symbol.) He also wanted to demonstrate the inefficiency of the primary system by proving that voters often "know not whom they support."


Ripley's Believe It or Not 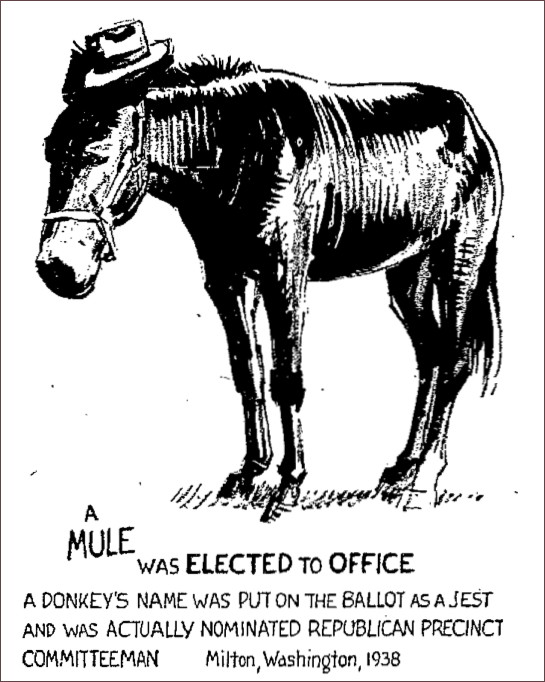 The Milton Mule episode was acted out on the "Ripley's Believe It or Not" radio show. In November, 1938 it also appeared in one of Ripley's nationally syndicated cartoons.

As a young man he taught himself how to hold his breath under water for a long period of time, and then built a tank with a glass front, joined a carnival, and billed himself as "Aquesa," the human fish. He would write, drink pop, and eat bananas under water.

Later he read about a man who set a record by remaining in a cake of ice for fifteen minutes. Simmons decided to beat this record, and he did, by a full minute.

Eventually he was elected mayor of Milton, and simultaneously served as chief of its fire department and head of the police force. The mule episode of 1938 was his most memorable act as mayor, but not his only one. On Halloween of 1939 he found a way to return Milton to national headlines by hiring the biggest and most mischievous boys in town to serve as special policemen for one night. However, the stunt backfired when twenty boys from a nearby town decided to invade Milton and challenge these special policemen to a fight. The Milton boys defended themselves with a fire hose, until one of their rivals was struck by the nozzle of the hose and had to be sent to a hospital with head injuries. State police eventually arrived and stopped the fight.

After serving as mayor of Milton, Simmons served in the state legislature for several terms. Later, he founded the town of Bonney Lake and became its first mayor.
Milton Mule Haiku (Submitted by Hoax Museum visitors)