The Lying Stones of Dr. Beringer

An engraving of a stone bearing the image of an astronomical object, from Lithographiae Wirceburgensis.
Dr. Johann Bartholomew Adam Beringer (1667-1740) was a Senior Professor and Dean of the Faculty of Medicine at the University of Würzburg in Germany. Like many physicians of the time, he cultivated an interest in natural history. In particular, he was intrigued by what was called the study of oryctics, or "things dug from the earth." Today we would call this the study of fossils, or paleontology.

Beringer kept a collection of interesting fossils he had acquired over the years. Until 1725 his collection was quite ordinary, but then, on May 31, 1725, some remarkable new pieces came into his possession. They were delivered to him by three local boys he had paid to explore nearby Mount Eivelstadt and bring him any interesting objects they might find.

What the boys brought him were three stones that displayed, on their surfaces, images in sharp, three-dimensional relief. One stone bore a stylized image of the sun. The other two bore images of worms.

Dr. Beringer was genuinely puzzled by the stones, and he grew even more puzzled as, over the course of the subsequent months, the boys continued to bring him more of these curiosities. By November they had brought him almost two thousand stones bearing the images of plants, insects, birds, snails, astronomical objects, and even Hebrew letters.

Beringer decided he should write a treatise about the stones, in order to bring them to the attention of other scholars. He published this treatise, titled Lithographiae Wirceburgensis, in early 1726. 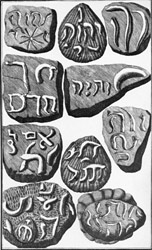 Ultimately Beringer rejected the idea that the stones were man-made. He felt that there were simply too many of the stones for a modern hoaxer to have produced them all. Nor could he imagine why anyone would want to expend so much energy to pull off such an elaborate hoax. He concluded that the stones had to be the work of nature, though he didn't know what natural process had created them. He left that question to his fellow scholars to debate.

According to legend, just as the first copies of his book were rolling off the printing press, the boys presented Beringer with a final stone, one which had his own name carved in it. Finally, he realized that he had indeed been the victim of an elaborate hoax. Humiliated, and in a state of panic, Beringer frantically tried to buy up all the existing copies of his book. Extant copies of the book are now extremely rare and can fetch over $10,000.


The Hoaxers
As Chapter XII of the Lithographiae Wirceburgensis demonstrates, Beringer was well aware of the possibility of a hoax before he decided to go to press. He wrote in that chapter:


With peaceful mind and tranquil pen I pursued the dissertation which I had begun on this controversy. Then, when I had all but completed my work, I caught the rumor circulating throughout the city, especially among prominent and learned men, that every one of these stones, which, on the advice of wise men, I proposed to expound in a published treatise, were "recently sculpted by hand, made to look as though at different periods they had been resurrected from a very old burial, and sold to me as to one indifferent to fraud and caught up in the blind greed of curiosity; further, that I, once deceived, in my wretched turn, was deluding the world, and trying to sell new hoaxes as genuine antiques, to the silent laughter of prudent souls." I was shocked beyond words to learn that the authors of this atrocious calumny were two men, perhaps best described as a pair of antagonists, whose names I have reason to protect at present -- men with whom I was closely associated in numerous functions, former colleagues in the Academic Society.

Despite the possibility of a hoax, Beringer pressed ahead. Evidently he had poured so much effort into the study of the stones that he couldn't bear the thought that all his work had been in vain. Instead, he convinced himself that, despite the rumor, the stones were real. He suggested that his two colleagues might be spreading a false rumor of a hoax in order to undermine his work.

But evidently, shortly after the publication of the book, something did happen to convince Beringer that all the stones were fake. Perhaps it was, as the legend suggests, the occasion of being presented with a stone bearing his own name. Melvin Jahn and Daniel Woolf have suggested that the local Bishop of the Church might have made the situation clear to Beringer.

Once convinced of the hoax, Beringer decided to bring criminal charges against the two men he suspected of the deceit. These two men were J. Ignatz Roderick, Professor of Geography, Algebra, and Analysis at the University of Wurzburg, and Georg von Eckhart, Privy Councillor and Librarian to the Court and the University.

The case came to court on April 13, 1726, and Beringer won a conviction against the men. The transcript of this case, discovered in the Würzburg State Archives in 1935 by Dr. Heinrich Kirchner, is the main source of information we have about the hoax.

Unfortunately, the transcript does not shed much light on the motivation of the hoaxers. We simply learn that they hated Beringer because "he was so arrogant and despised them all."

A sample of some of the "lying stones" still extant.
In the short run, Beringer emerged from the incident in better shape than his hoaxers. Despite later rumors that he was so mortified by the hoax that he died soon thereafter, he actually lived on for fourteen more years and wrote two more books.

By contrast, von Eckhart died four years after the trial. Roderick was forced to leave Würzburg, with a cloud of dishonor permanently hanging over him.

However, history was not kind to Dr. Beringer. The story of the Doctor and the "Lying Stones" ("Lügensteine" as German authors called them) soon spread, and the Doctor's name became a byword for credulity. The popular version of the story that circulated during the subsequent two centuries falsely alleged that Beringer had fallen for a simple student prank, rather than for an elaborate scheme concocted by jealous colleagues. In academic circles, Beringer's story served as a cautionary tale about the danger of wantonly pursuing unsupported hypotheses.

A second edition of the Lithographiae Wirceburgensis was published in 1767, twenty-seven years after Beringer's death. It is not clear why the book was republished at this time. In 1963 Melvin Jahn and Daniel Woolf published an English translation of Beringer's book.
Links and References
18th-Century Hoaxes Paleontology Satirical Scientific Hoaxes
Tweet