On August 31, 1987, the double-A Williamsport Bills were playing the Reading Phillies. Rick Lundblade of the Phillies was on third base, waiting to run for home. The pitcher threw the ball low, into the glove of the catcher, Dave Bresnahan, who immediately threw it towards third hoping to pick off Lundblade. But the throw went wild, over the head of the third baseman, and Lundblade triumphantly sprinted towards home. But when he reached home he found Bresnahan waiting for him with a grin on his face and the ball in his hand.

The entire stadium erupted in confusion. If Bresnahan had thrown the ball out into left field, how was it possible that he now had it in his hand, waiting to tag Lundblade out? The answer was that he had not thrown a ball into left field. What he had thrown was actually a peeled potato. 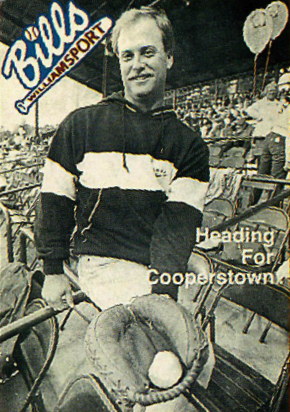 Bresnahan holding the potato
The stunt immediately became known as the Great Potato Play. It cost Bresnahan his job with the Bills, but on the other hand, it also earned him an immortal place in baseball history.
Sports Hoaxes of the 1980s
Tweet