It was a hot night on July 8, 1953. Police officer Sherley Brown and his partner were doing a routine patrol down rural Bankhead highway near Austell, Georgia when up ahead they saw a pickup truck stopped in the middle of the road. They pulled over to investigate. What they found was the most unusual scene they would ever encounter during their entire careers as officers.

Three frightened young men — Ed Watters (a barber, reportedly 28, although he looks younger in the photos), Tom Wilson (a fellow barber, 20), and Arnold 'Buddy' Payne (a butcher, 19) — were waiting nervously by the side of the road. And lying there on the tarmac in front of the truck, illuminated by the vehicle's headlights, was a bizarre two-foot tall creature that looked for all the world like a space alien.

Space aliens had been in the news a lot. Just the night before there had been multiple reports of a large, multicolored, cone-shaped object flying overhead near Marietta, Georgia. But no one had ever produced a flesh-and-blood alien before. 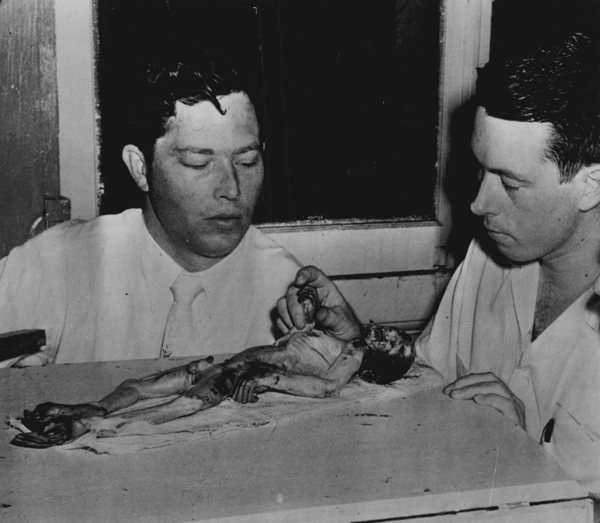 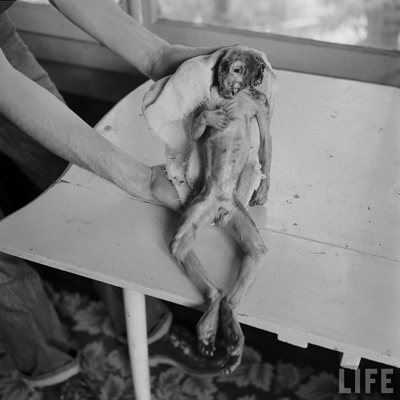 The young men spilled out a strange tale. They said they'd been out in their truck "honky-tonking" around, when they came over a hill and suddenly found themselves careening towards a small flying saucer that was 'glowing red all over.' Three small aliens were outside the craft wandering up and down the highway. The young men said they jammed on their brakes, but couldn't avoid hitting one of the aliens. The other two spacemen made it to the ship and blasted off, leaving circular scorch marks on the road that were still visible.

Ed Watters later told the press, "They all jumped for it. Two of them made it. I hit the other one. The red object turned blue and sailed away at a very fast speed."

At first the officers weren't sure whether to believe the tale, but they couldn't deny the physical evidence that backed it up: the long skid marks on the highway, and the body of the alien itself lying lifeless in the road — a hairless, two-foot tall humanoid creature with eerie, round, dark eyes.

But unsure what to do about the incident, the officers reported it to their somewhat skeptical chief, and let the young men go home with the space alien. 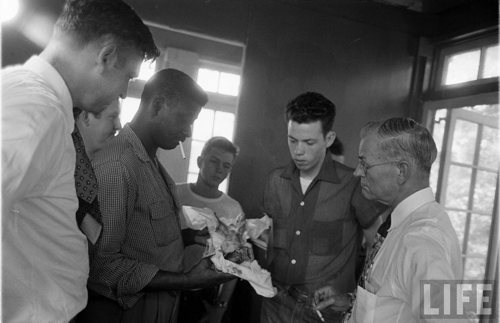 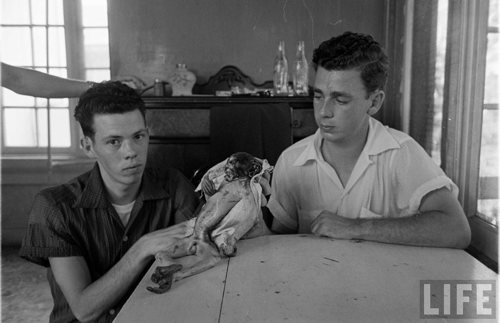 The three young men went home, put the alien in their refrigerator, and then called the Atlanta Constitution. A reporter there asked them to bring the alien in, which they did, and the newspaper then had the body examined by a local veterinarian who proclaimed that it did indeed look like "something out of this world." So the story went out on the news wire, announcing that a space alien had been captured.

The sleepy Georgia county immediately found itself at the center of a media frenzy. Reporters descended on the small town, and news offices from around the country flooded the switchboard of the police station. Even representatives from the Air Force arrived to assess the situation.

It was at this point that the state police authorities got involved. Dr. Herman Jones, head of the Georgia crime lab, arrived on the scene, confiscated the creature, and took it to Emory University to be examined by two anatomy professors, Drs. Marlon Hines and W.A. Mickle. The professors quickly determined it to be of terrestrial origin — a Capuchin monkey made to look alien by cutting off its tail and removing its fur with depilatory cream.

Dr. Hines commented that if the creature "came from Mars, they have monkeys on Mars." Dr. Mickle added, "If it's from outer space, they haven't invented anything new." 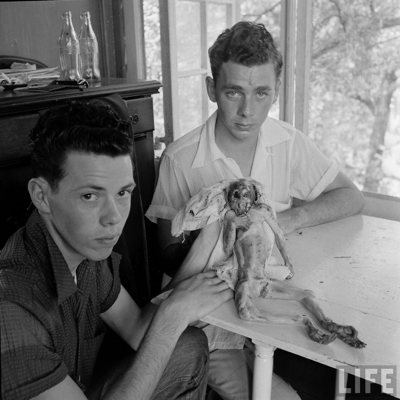 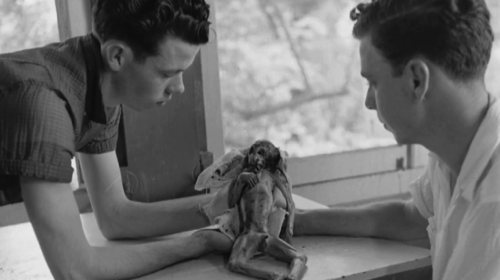 When confronted with these expert opinions, the young men confessed. The three were roommates, living together at 1919 Peachtree Road, and they explained it had all been nothing more than a prank inspired by a bet made during a card game. Ed Watters had wagered his friends $10 that he could get himself featured in the local paper within a week. To win the bet, he had bought a monkey at a local petshop, gave it a lethal dose of chloroform, removed its hair, and chopped off its tail. The result was a creature that looked decidedly alien. They had used a blowtorch to burn the scorch marks on the highway. 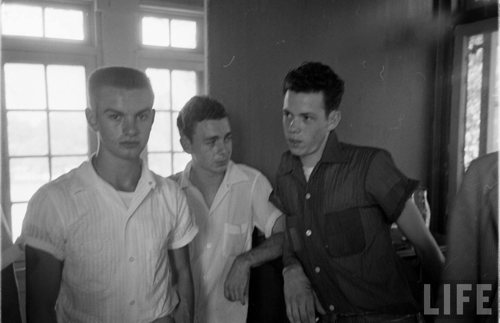 The three pranksters. Watters is on the far right.

The three pranksters were arrested and charged with cruelty to an animal. However, they got off on a technicality because Judge James T. Manning decided that this charge couldn't be tried in Cobb County, where they were arrested, because the monkey had been killed in Fulton (Atlanta) County. But they didn't get off scot free. Because several cars had collected at the point where Watters claimed to have hit the alien, a charge of highway obstruction was entered to which Watters pleaded guilty. He was fined $40. His two friends were dismissed.

So although Watters won his bet (he was profiled not only in local but also national papers) he ended up deeply in the red because in addition to the fine, the monkey had cost him $50.

Very little is known about the subsequent careers of the three men. Watters reportedly left town a few months later because he got tired of people referring to him as the Monkey Man. But other than that small item of information, they all dropped completely out of public view. However, their caper has lived on in Georgia lore, remembered by locals as the Great Monkey Hoax of 1953.

As for the shaved monkey, it was initially stored in a back room at the Georgia Bureau of Investigation, but due to the persistent interest in it, it was eventually put out on display at the GBI's mini-museum in DeKalb County. However, you're advised to make an appointment if you wish to see it. 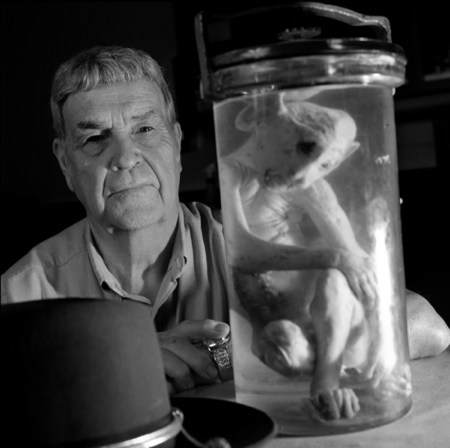 Officer Sherley Brown poses with the monkey in 1998 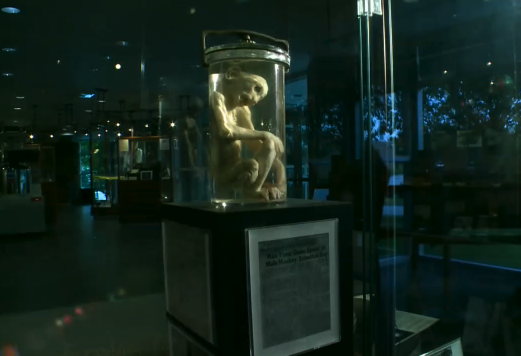